Each day has continued to set the bar for the next as we chase storm after storm erupting within the plains. Today we got a real taste of the power associated with these storms as well as the structure that can come with a select few of them.

After waking up in Pratt Kansas and analyzing data, parameters led me to believe that the best area to witness tornadoes would be in eastern Oklahoma. Better instability along with shear values approaching 60 knots from zero to six kilometers, a bulging dry line associated with a developing surface low in western Kansas, and higher helicity values made that area seem like the best choice.  Instability refers to CAPE, which is the energy an air parcel could tap into if it reaches a certain height in the atmosphere.  Shear describes changing winds with height. The apex of dry lines tend to initiate strong thunderstorms, and helicity describes the ability for a storms updraft to rotate   Sounding observations also agreed with this area in relation to greater backing of winds at the surface in eastern Oklahoma, which provides a more favorable environment for tornadoes.  Except for a fairly unstable atmosphere with mixed layer CAPE approaching 2000, Kansas had very little going for it.  One thing unconsidered amongst the group was the road network in eastern Oklahoma which turns out to be terrible.  After that revelation, we decided to play our cards in north eastern Kansas and see what we would be dealt.

We left Pratt Kansas to head east around 10 a.m. and ended up in Wichita Kansas where we enjoyed the sights of Wichita State University, home of the shockers. 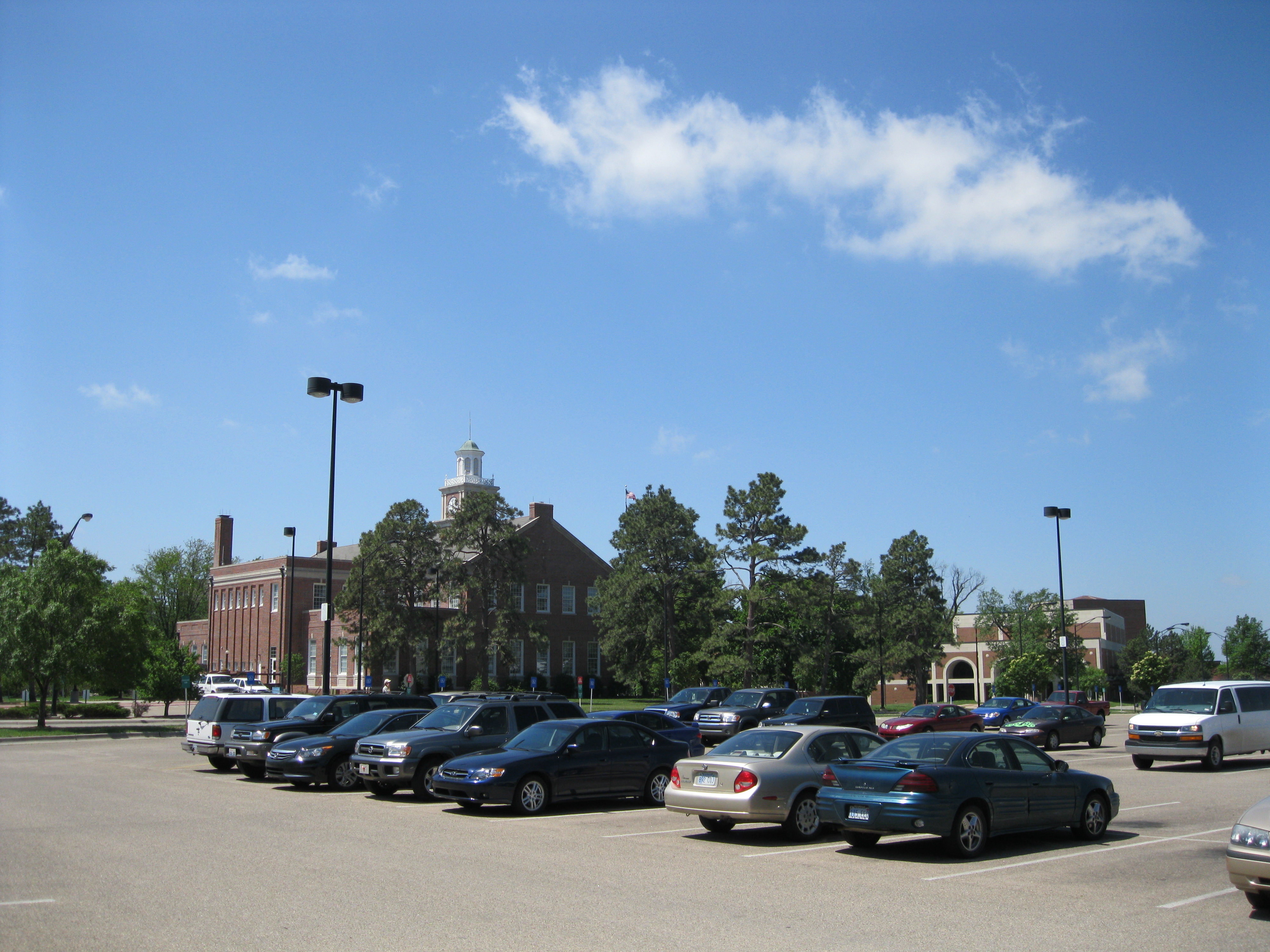 Fairly clear skies all around gave visual clarification of CIN in place, which is a measure of the amount of energy a parcel needs to reach the level of free convection and continue to rise in the atmosphere. Although CIN can inhibit storms to develop if too strong, it can also be a good first step in severe storm development because this setup essentially places a lid on the atmosphere, allowing moisture from the Gulf Of Mexico and surface heating provided by the sun to build up at the surface.  This scenario makes the atmosphere increasingly unstable, and similar to a balloon being filled with too much air, eventually something’s gonna give.  We continued east after eating lunch at Jason’s Deli (highly recommend) and were forced to wait for cells to initiate. After viewing the countryside in Emporia Kansas waiting for initiation, storms finally began to fire just north of Miller Kansas around 5 p.m. moving northeast toward Topeka; the chase was on. 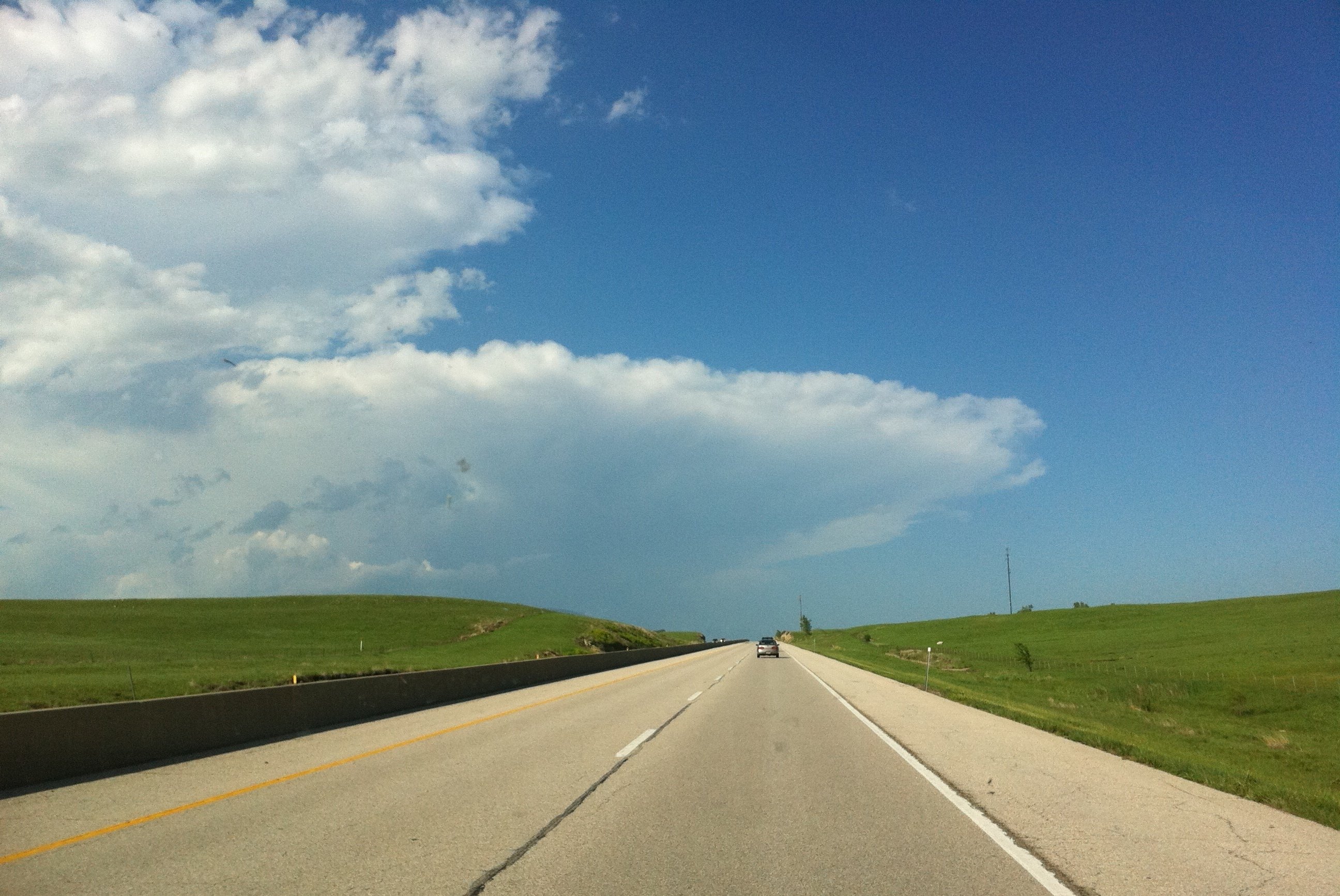 Thunderstorms beginning to build while traveling northeast on I-335. Photo taken by Dr. Durkee.

Initial view of the storms showed two typical air mass thunderstorms with decent hail on base reflectivity, which detects water particles within a storm. But as we got closer to the cells, strong rotation began to develop on base velocity which detects how winds are blowing in relation to the radar.  A closed road detoured us away from the storm, but after catching up to the northernmost storm, strong rotation was evident in a cell as a mesocyclone rotated just to the west of us with a pronounced wall cloud and funnel cloud peaking out of the base. 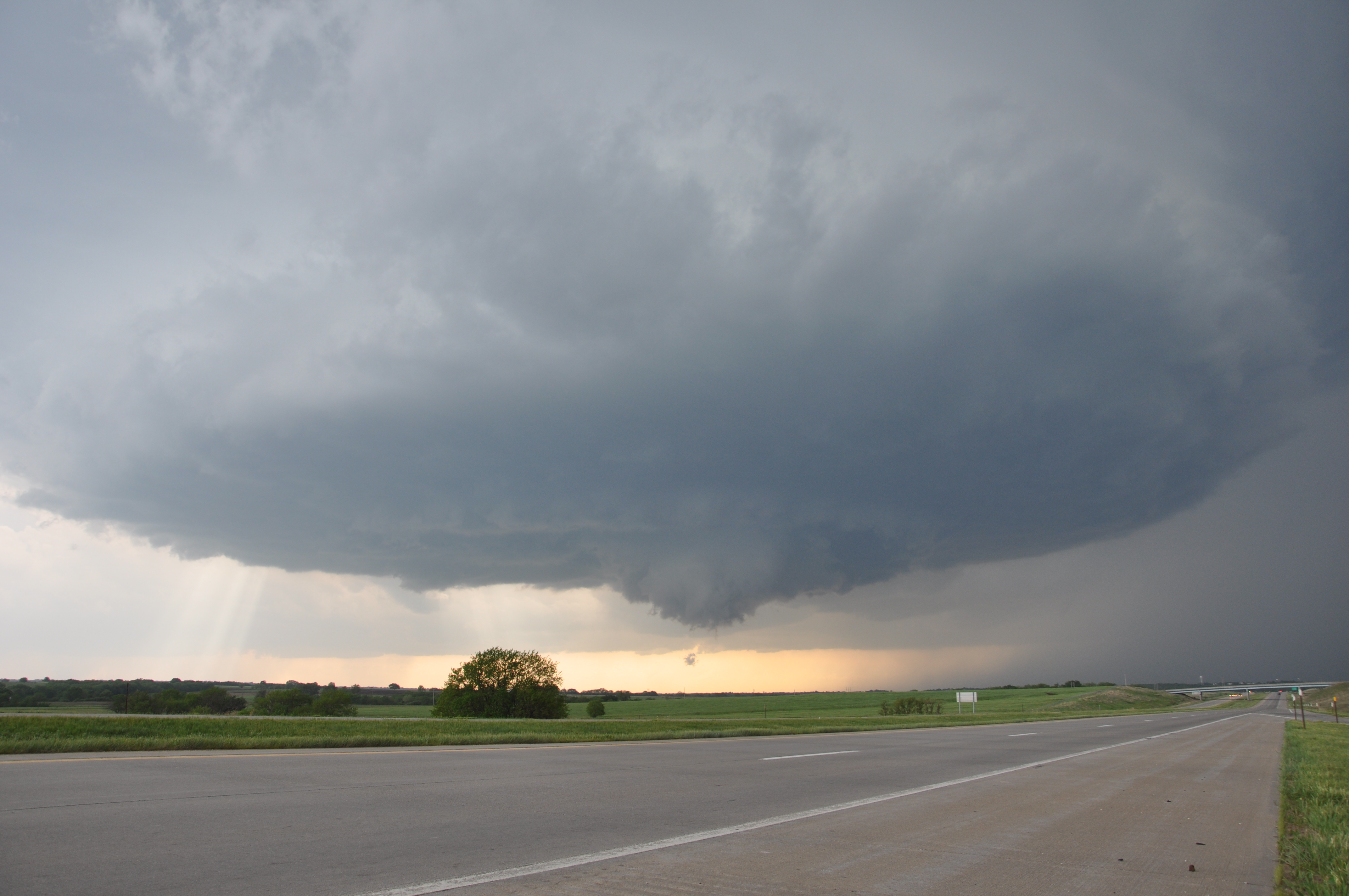 Speaking for myself, this was the first time I had seen storm structure so pronounced, or even a funnel cloud!  Many features associated with this supercell; which are rotating thunderstorms, are clearly identifiable in this photo.  It was essentially a “textbook” idealization of what makes up a supercell. We continued northeast in a stair stepping motion and captured more incredible photos and video as the storm began to rotate even quicker. 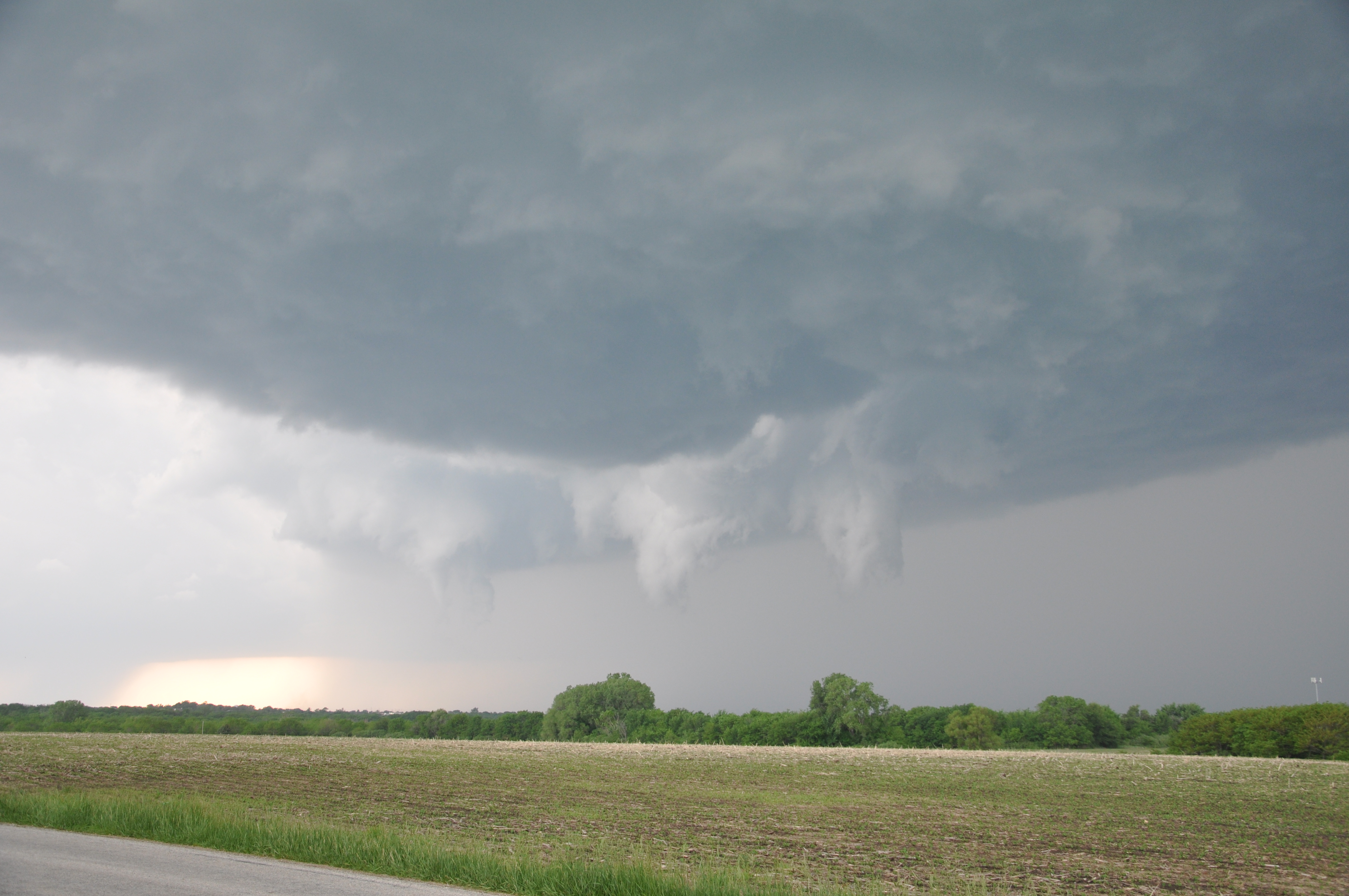 Three funnel clouds rotating through the base of the wall cloud 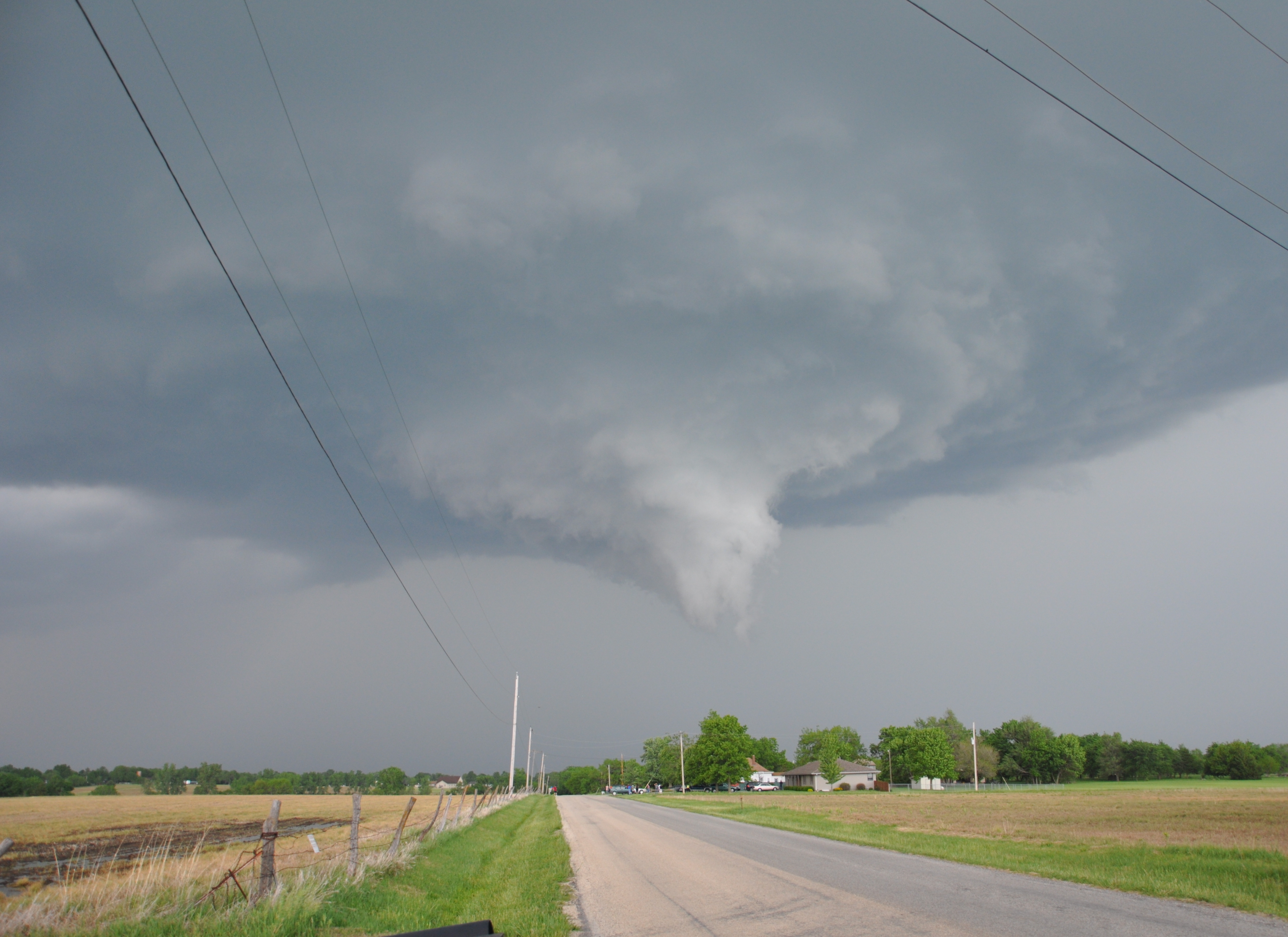 Rotation beneath the wall cloud beginning to tighten as funnel tries to reach the ground. The motion was unbelievable 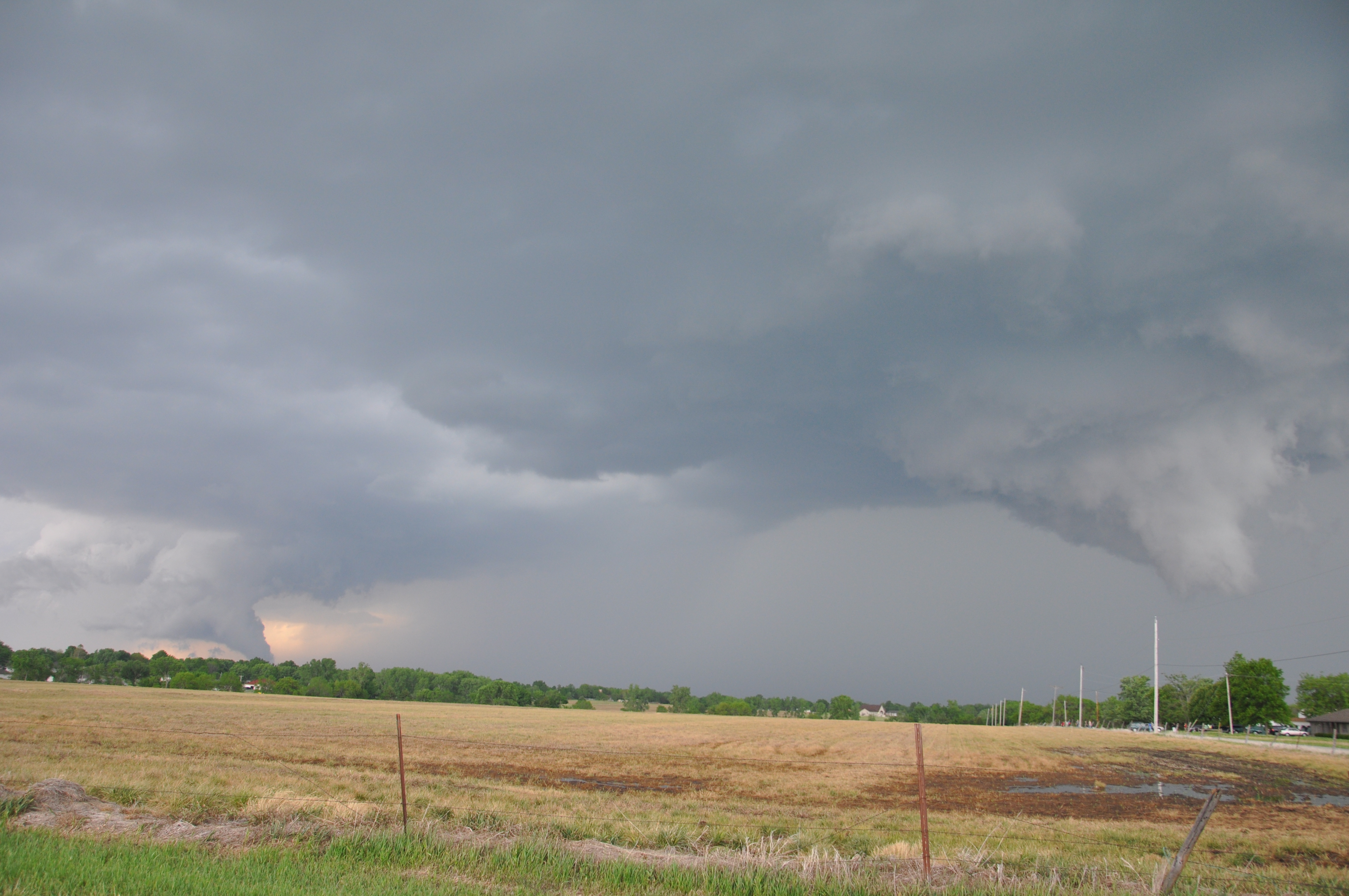 View of two strongly rotating areas of the supercell

While continuing to keep up with the storm, we encountered two more hurdles along the way; one being a large mass of Kansas residents and other storm chasers driving around to see the storm, as well as damage the storm had produced.  As we drove along a road headed north alongside the supercell, tree damage was noticed, and just ahead of us a very large tree was laid out across the road blocking our path, forcing us to turn around and go back the way we came.  At this point it would be difficult for us to catch back up to the storm, and the system seemed to begin to weaken, so we decided to change route and chase the other storm continuing to develop just south of out location. 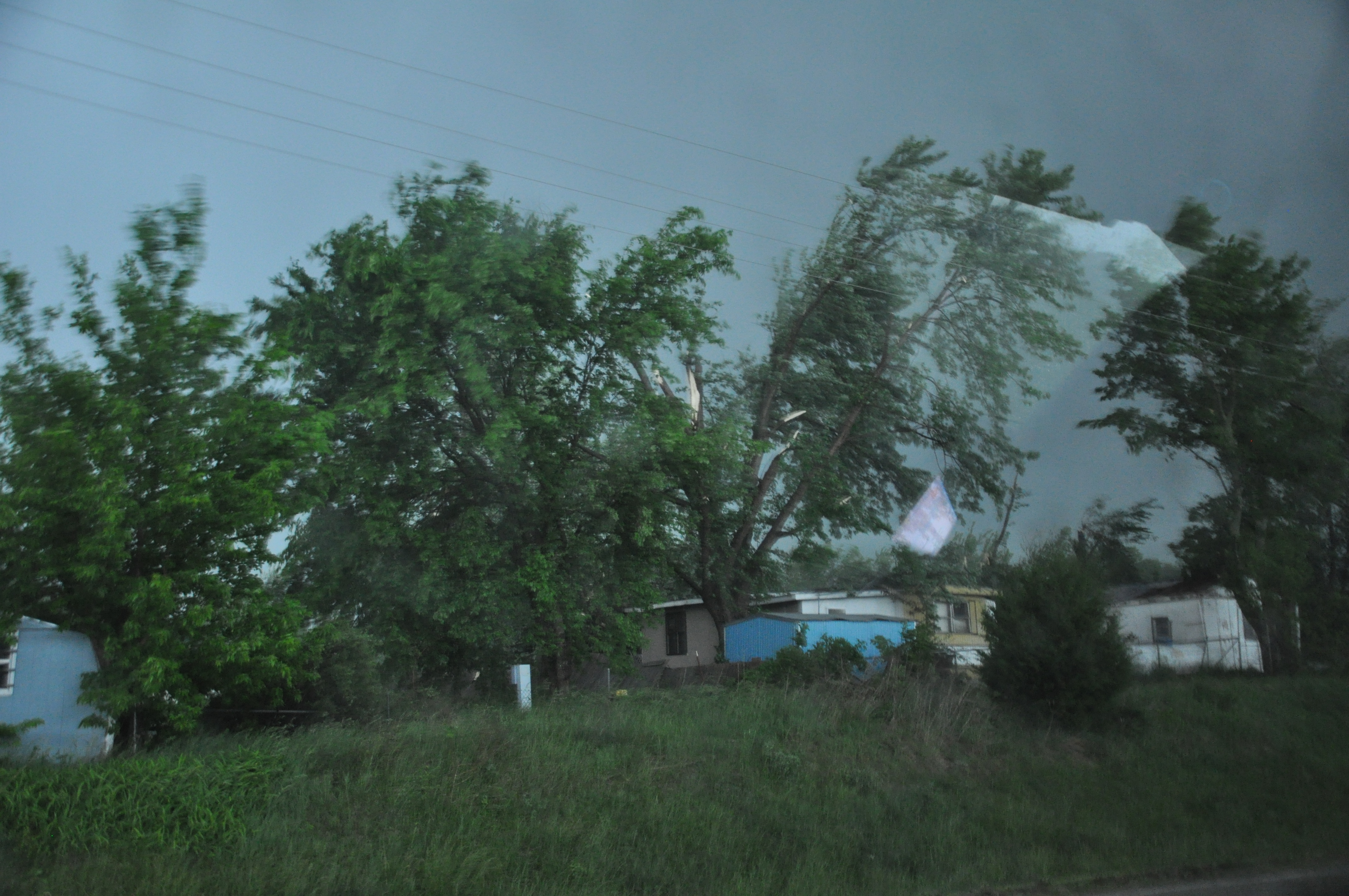 Damage that occured to trees all along the road, few were down like the tree that lay across the road, but many were snapped half way up like the tree in this photo. Apologize for the glare

It is not apparent to us that this was related to a tornado.  Although the funnel was spinning quite rapidly and making its way to the ground, we could never confirm that it actually made it to the ground.  It’s believed that the tornado never  made it to the surface because lower level helicity was not strong enough to speed up and tighten the rotation toward the surface.  The damage certainly also could have been caused by strong winds that develop on the back sides of supercells, which is known as RFD, or the Rear Flank Downdraft.  I’m sure a National Weather Service survey will be conducted to determine how the damage was caused, and a confirmation of how it actually was caused will be added to this section when available.

We continued to chase the supercell and witness the structure on the second cell as well.  Eventually the sun set and distinct features visible during the day faded into black.  However, lightning was incredible with the storm, so we decided to find the best position possible and gather lightning photos.  The continuous bolts of lightning continued to light up the horizon until well after midnight.  After it was all said and done, we chased behind the cells from Emporia Kansas all the way into Kansas City Missouri where we checked in for the night and enjoyed a meal at Ruby Tuesdays to recap the day’s adventure.  All photos/videos taken by me excluding photo crediting Dr. Durkee. 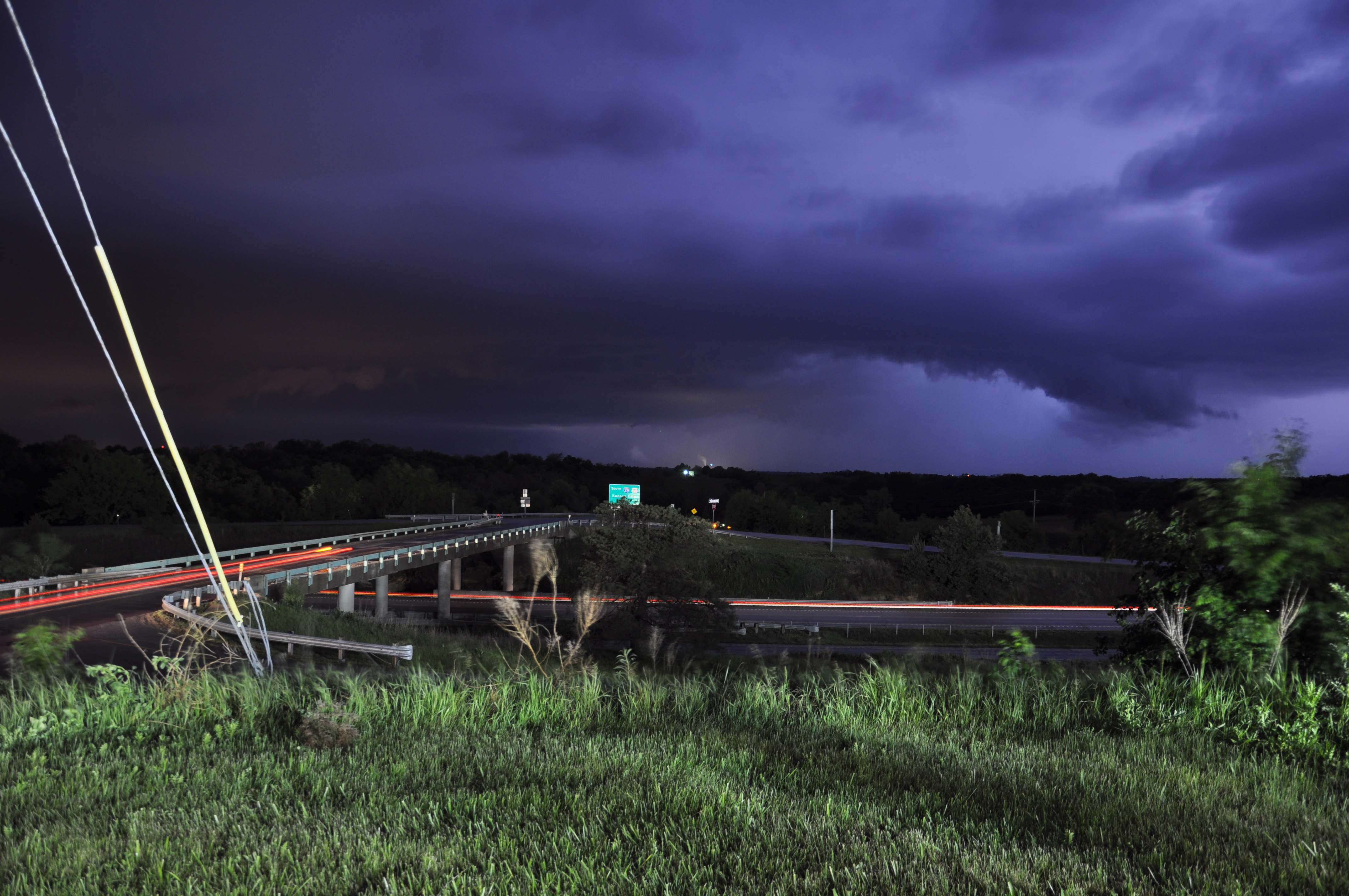 Lightning shot of storms in the distance while located in Missouri.