The group started out the day in Bartlesville,OK with everyone focusing their attention to the west. One of the main features we were looking at was a 700MB shortwave that was moving out of the four corners region. This would play a important roll in enhancing the lift over the area. Once on the road the decision was made to goto Tonkawa, OK to further access the situation. Most of the other parameters were coming together with CAPE in the 3000 to 4000 J/kg and bulk shear in the 30 to 40 kt range. Just outside of Tonkawa we took note of a cell that began to rapidly rise. We started to make a move on this cell, but noticed it was not looking positive on radar. So we began to make a play on the storms to the south and west of our location. When we made it on these storms we were able to see a wall cloud, but we needed to take cover under a over hang in order protect ourselves from hail. Once clear we tried to make a play on the storm, but it also became to difficult to see.  The road network was also difficult to navigate.  We made a decision to move south to a more promising storm. 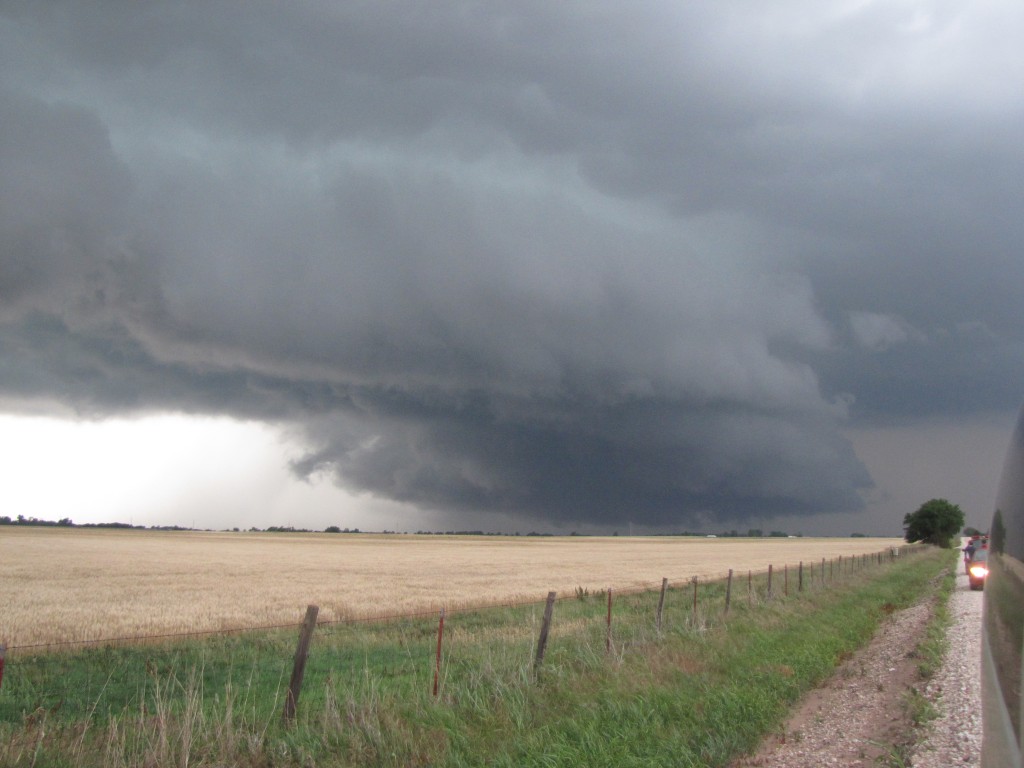 After moving south we were able to intercept a storm just west of Kingfisher, OK. The storm produced a large wall cloud and at one point produced a brief funnel (wall cloud pictured above). The group then moved east to try and get out ahead of the storm. The clear slot began to close in and we had to go east and south quickly to avoid the large hail. The hail was 3.5 inches at times in the main core with quarter size hail hitting the group. Once we were able to get south and east visibility was poor due to rain. The storm was still wrapping tightly, but we just ran out of daylight. We also did not want to go any farther south due to staying in Wichita. The rotation on several of the storms was impressive and the group did see multiple wall clouds and one funnel cloud.  This made for a successful day even without tornadoes.  Today looks to be more promising.