Over the weekend, the extremely drought stricken areas of Oklahoma and Texas could potentially get some help from mother nature.  Thanks to the blocking pattern that’s currently in place over the eastern United States, any storms that move into the country are forced to go up and over this ridge that’s kept much of our weather pleasant and unseasonably warm.  As long as the blocking pattern stays in place, which only looks to be for about the next 5 days, any forward movement will be halted, placing areas that desperately need some rain under the influence of a cold front.

Currently we can see that almost the entire area contained within Texas and Oklahoma are and have been under an exceptional drought.

Much of the area that looks to be "on fire" may have some of those flames put out.

The models at the NOAA Hydrometeorological Prediction Center, at times over-predicting rainfall totals, still  show two distinct hot-spots for precipitation for the next 5 days.  The 5-day precipitation total published on their website shows a staggering 10.8 inches of rain forecasted for an area near Witchita Falls, TX.

Notice the extremely high numbers over Florida, Oklahoma and Texas

Any totals such as this are way off base given the conditions in the area.  The lack of soil moisture available will inhibit the sustenance of any convection that develops along the boundary.  However, persistent southeasterly flow off of the Gulf of Mexico provides the moisture advection necessary to allow for what will likely be persistent rain showers with some isolated thunderstorms.  Flash-flooding will be a major concern this weekend over the area.

Current surface conditions show the synoptic setup for this weekend.  The main feature causing the HPC models to pick up on the significant rainfall is the high pressure system at the surface, encompassing much of the east.  A tight pressure gradient is developing over Florida , allowing for strong easterly winds over Florida.  Along a stationary boundary located south of Florida, an area of rotation is expected to form in the wake of this tight pressure gradient and the enhanced easterly flow.  This looks to be the source of our next chance of rain in the Bluegrass State, most likely around Tuesday or Wednesday.

Note the position of the frontal boundary from Kansas southward toward New Mexico.

High pressure is still dominating weather in Kentucky through this weekend.

The frontal boundary has not moved much by Sunday morning

The frontal boundary is marked south of Florida. 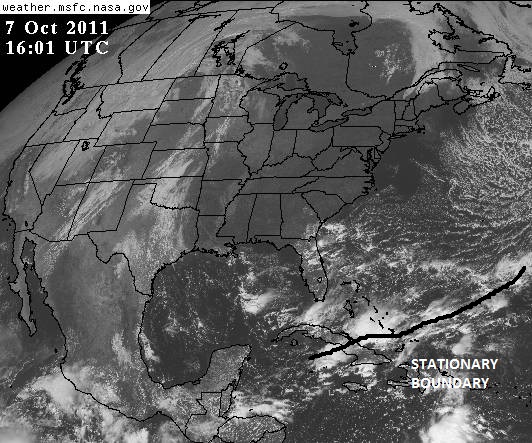 We’ll have to wait and see how the ridge in the east moves, because that will be one of the steering mechanisms of any rotation and moisture that advects northward from the Caribbean.

This entry was posted in U.S. Weather. Bookmark the permalink.