Zonal flow aloft and high pressure at the surface will make for a pleasant start to the week in the mid-South. Highs in the mid to upper 60s and lows in the upper 30s are expected today through Wednesday under mostly clear skies. On Thursday, an upper level trough will approach the region from the west, bringing with it a chance for some showers.

One region that did not experience tranquil conditions over the weekend is the Northeast. A freak October snowstorm dropped a swath of heavy snow from West Virginia to Maine Saturday through Sunday, breaking numerous records in the process. For many locations, it was the largest October snowfall on record; a good summary of the storm from Weather Underground can be found here. Some of the remarkable records set by the storm: Concord, New Hampshire received 22.2″ of snow, which was not only the all-time daily and monthly October snowfall record (both previously 3″) but was also the third-largest storm total snowfall on record, regardless of month. Central Park received 2.9″, breaking the previous October record of 0.8″ set in 1925. The big “winner” was Peru, Massachusetts, which recorded a whopping storm total of 32″. An interactive map of snowfall totals can be found here.

The early-season timing of the storm meant that it had an even larger impact that these amazing statistics would suggest. The heavy, wet nature of the snow, combined with the fact that many trees still had some or all of their leaves, caused widespread tree damage and power outages throughout the Northeast. At the height of the storm, over 3.1 million customers were without power in the region. The governor of Connecticut declared a State of Emergency, and that state’s Department of Transportation said that the storm knocked down five times as many trees as Hurricane Irene earlier this year. So while the snowfall totals in this storm weren’t quite as high as some of the memorable Northeast blizzards of recent years, the unusual timing and widespread tree damage will ensure that “Snowtober” won’t soon be forgotten. 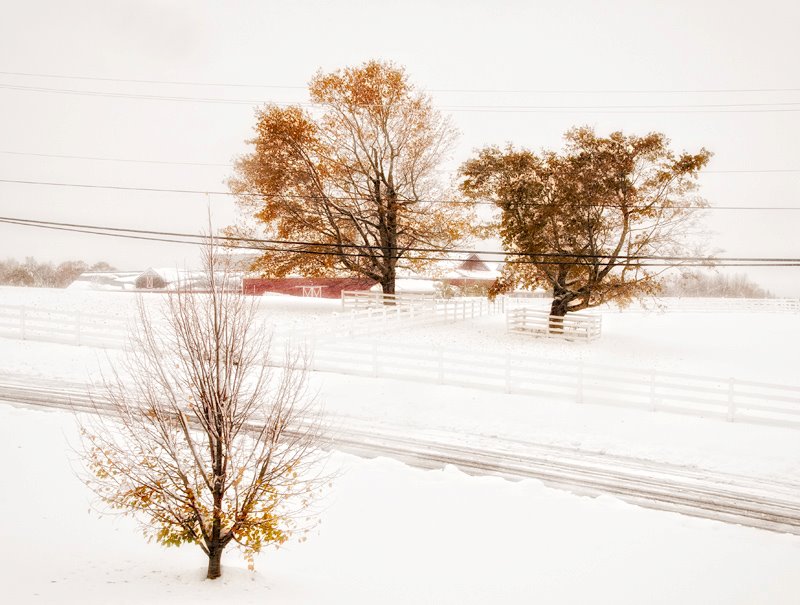 Snow at the NWS Gray, Maine office, which received 12.9"