We woke up in Waterntown SD with a tough decision on our hands as we tried to discern the difficult setup that was ahead of us. Two distinct locations were discussed among the group; one being a central North Dakota play where the best moisture and instability would be, while northern North Dakota provided the best shear to organize storms with limited instability but best backed winds at the surface which supports the development of tornadoes. A cloud deck moving from west to east also added difficulty to our forecast. Strong capping through most of the Dakotas could keep storms from initiating, or initiate in the afternoon hours. Depending on where storms initiated as well, we may end up too far north to make a play on what looks to be a south eastern to south central Nebraska severe weather event Wednesday. Topography would also be a large factor today, because a river running through central North Dakota wold block access to a western route if storms fired west of the river. After discussing the setup and options available, it was decided that we would drive to Bismark North Dakota in order to have plenty of road options depending on where storms initiate throughout the day.

After marching north to Fargo North Dakota and taking a short visit to Moorhead Minnesota, we took a short break in Fargo to spend some time at a park further assessing the setup.

Passing time at a park to assess data

After leaving Fargo we headed to Jamestown SD to stop at a Subway and grab lunch. We then continued west toward our target location of Bismark continuing to monitor the developing storm system.

After reaching Bismark, we then took another break to determine our next move, either wait for storms that may possibly develop at our current location or begin to chase storms that were beginning to develop on radar, but with a very weak signature. After continuing to monitor the weak initial cells, one caught our eye that began to blossom with decent structure associated with it. We then decided to follow this storm and headed toward the north just southwest of Minot North Dakota. 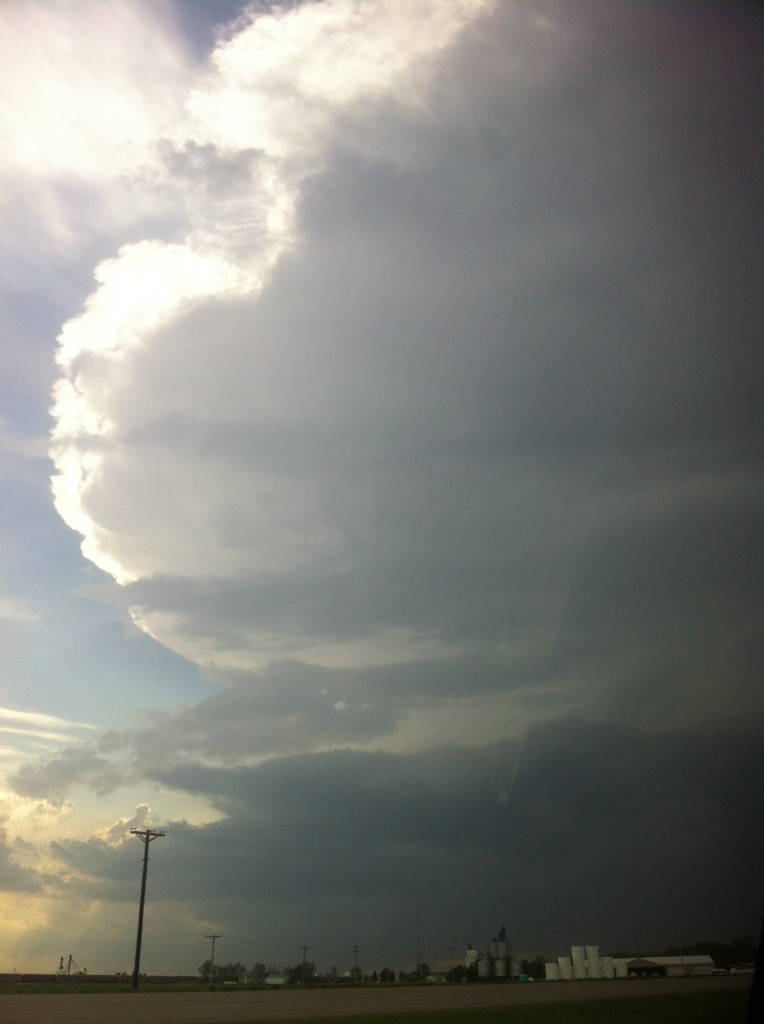 Anvil of the storm we targeted

The storm first came into view around 6:00 p.m. The anvil structure associated with it was impressive, and as we began to approach the base of the storm, we witnessed a surprise rapidly rotating wall cloud and lowering funnel cloud. 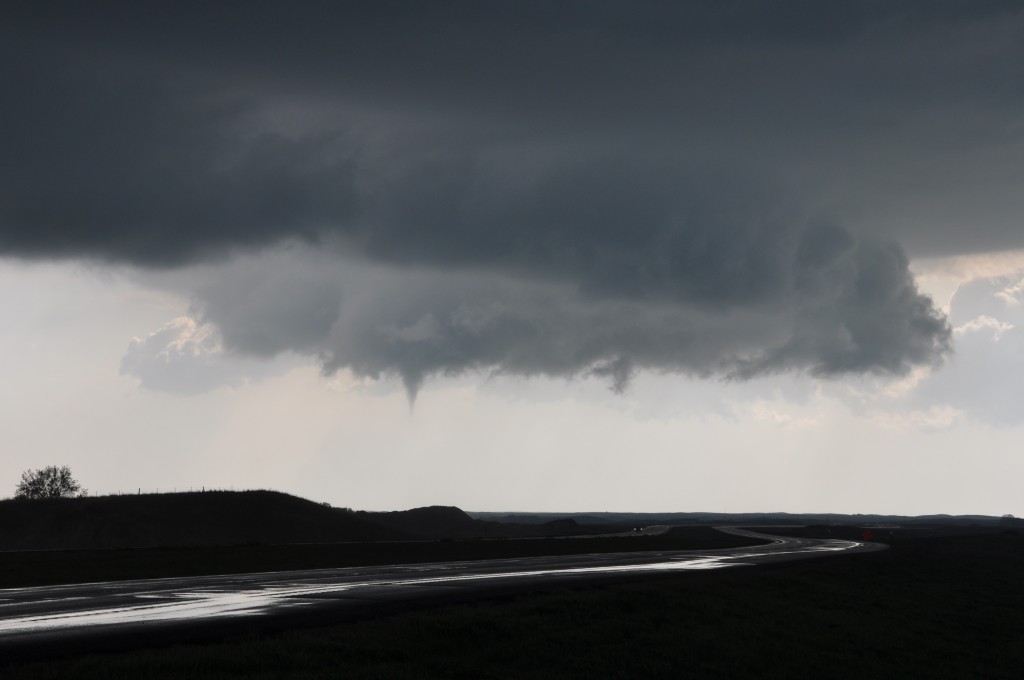 After watching this funnel rapidly rotate and dangle from the base of the storm, we continued to chase the storm which eventually developed into a garden variety thunderstorm. While continuing to observe the storm, we received one more surprise with a modest intensification of the storm we were viewing to our south. Hail began to fall at a modest rate ranging from pea to quarter size. It was a successful end to a spot on forecast in a fairly difficult setup. 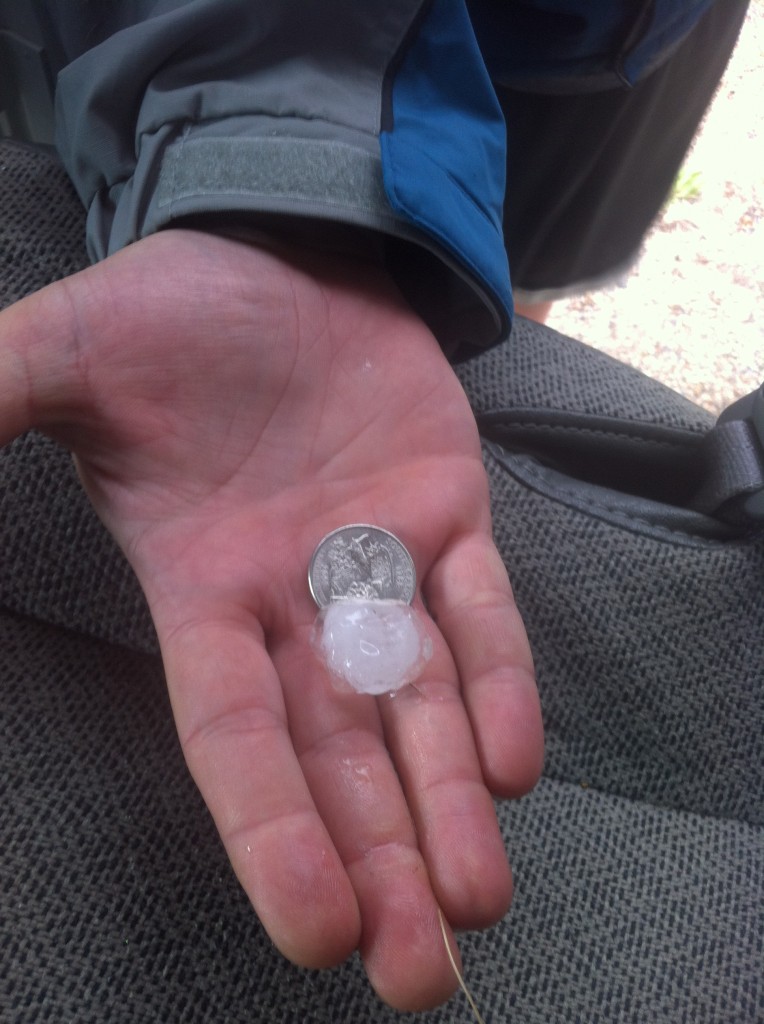 Hail just under the severe threshold of 1". Still fairly large regardless.

We ended the night with a long drive south ending in Aberdeen South Dakota to be in range for our next target Wednesday. 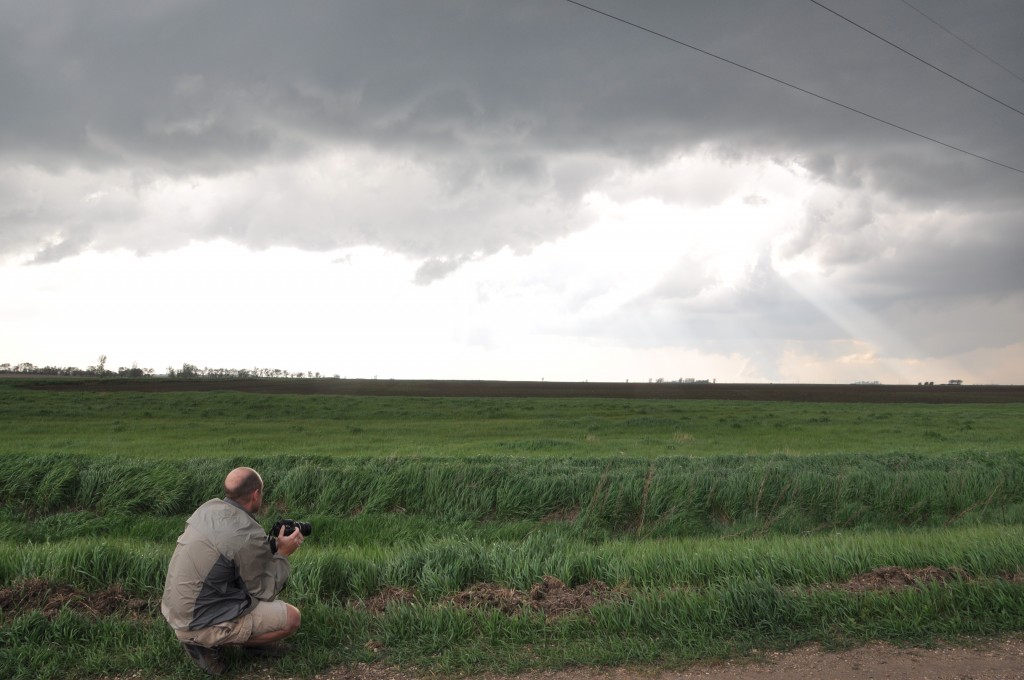 "The Instructor In The Classroom" 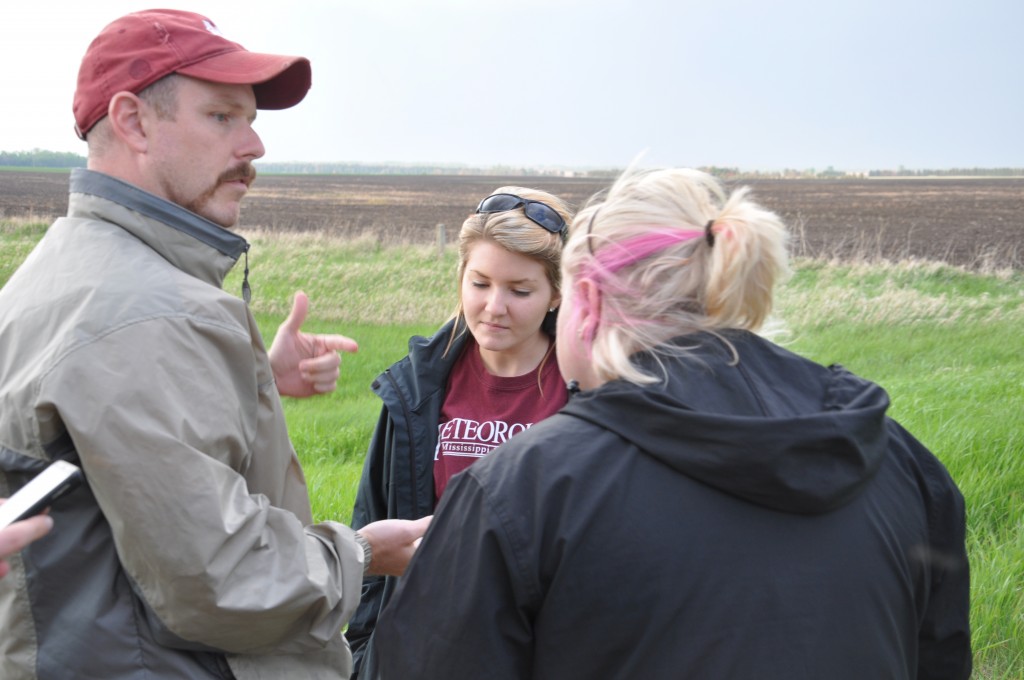 Tami Gray, Becca Ollier, and Dr. Dixon engaged in conversation about the unique texture of the hail that fell

Update: Although hard to discern from our own pictures, photos taken from other vantage points show the needle funnel cloud we witnessed in contact with the ground.  No confirmed tornado reports have been made, but it is possible that May 22nd marks the 1st tornado sighting of the 2012 WKU Storm Chase Class! The issue, we believe, is that the contrast and lighting on the back side of the funnel cloud may have washed out a view of the funnel in contact with the ground at our location.  Hopes are that updates on the matter will manifest themselves later on throughout the class.