After spending the night in Wichita Falls, TX, the group had decided on an initial target of Weatherford, OK with the anticipation of driving northward to position ourselves near the triple point. The triple point is defined as the point where 3 boundaries intersect and in this case was where a warmfront, coldfront, and dry line intersected with a developing low pressure center in western Oklahoma.

Aside from the increased lift and shear provided by the triple point, this target was chosen because an axis of instability with CAPE values near 4000 J/kg resided up to and near the triple point, under a very weakly ‘capped’ environment. Also an upper level impulse with northwesterly flow was forecast to slowly deepen and provide an environment favorable for supercells or multi-cellular storms.

The only limitation from today was the higher cloud bases and very modest low-level flow, that likely limited the tornadic threat. Nonetheless, with minimal expectations of tornadoes, we knew we would at least get to see some terrific structure, and boy did we!

After finally stopping for a sit down lunch, and one other than Subway, moved northward to the warm front and watched cells initiate near O’Keene, Oklahoma. After some initial linear development the southernmost cell began to rotate and move southeast towards Kingfisher, OK. 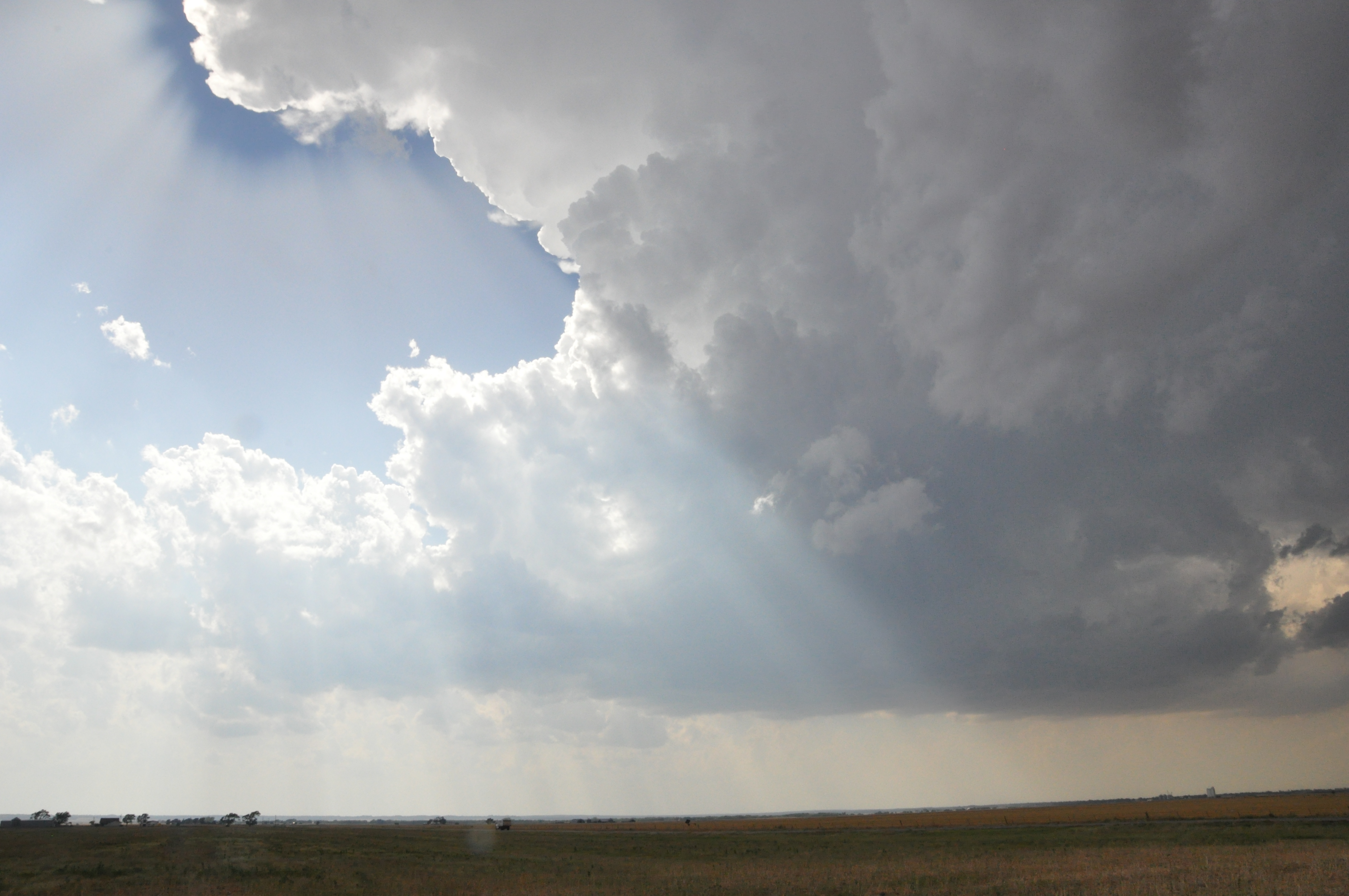 Not long after, the storm began to progress and root itself in the boundary layer,  and the group got to witness a wall cloud that briefly took shape as the storm cycled In Kingfisher. 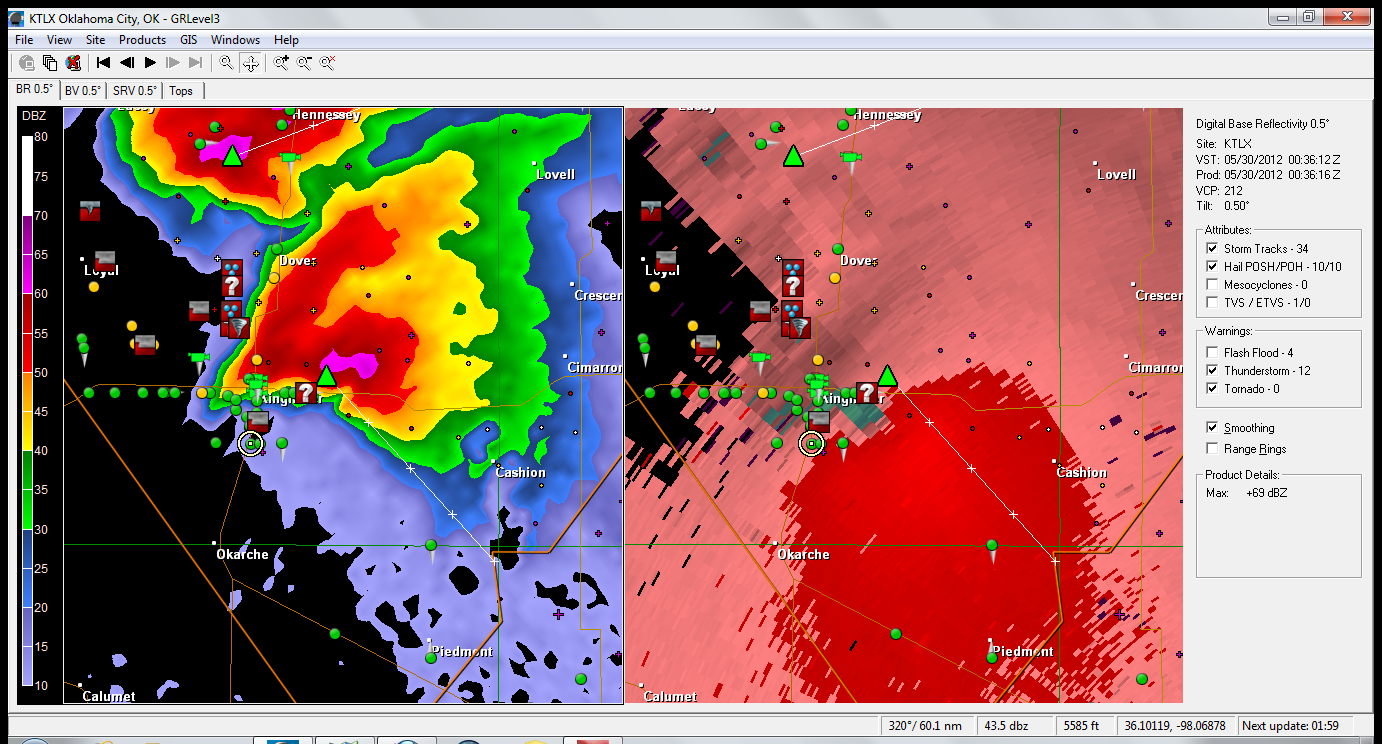 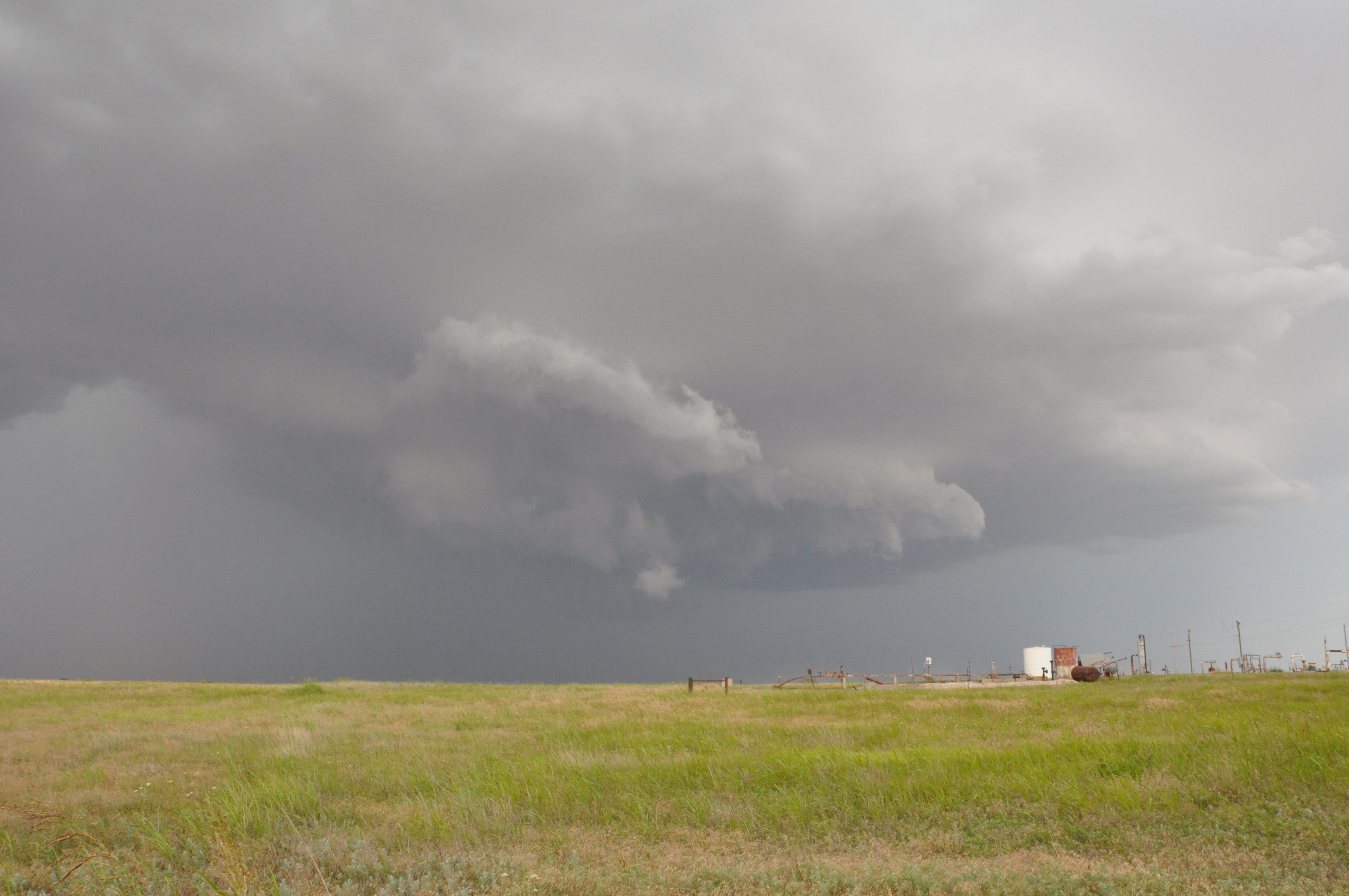 Near Peidmont, which is a suburb of Oklahoma City, the storm quickly intensified, as another storm from the south interacted with it and was absorbed into the parent storm’s updraft. This likely caused an increase in low level shear and lead to the birth of what may have likely been a rain wrapped tornado. There were reports from other spotters that this indeed was the case, but was not readily visible from our location. 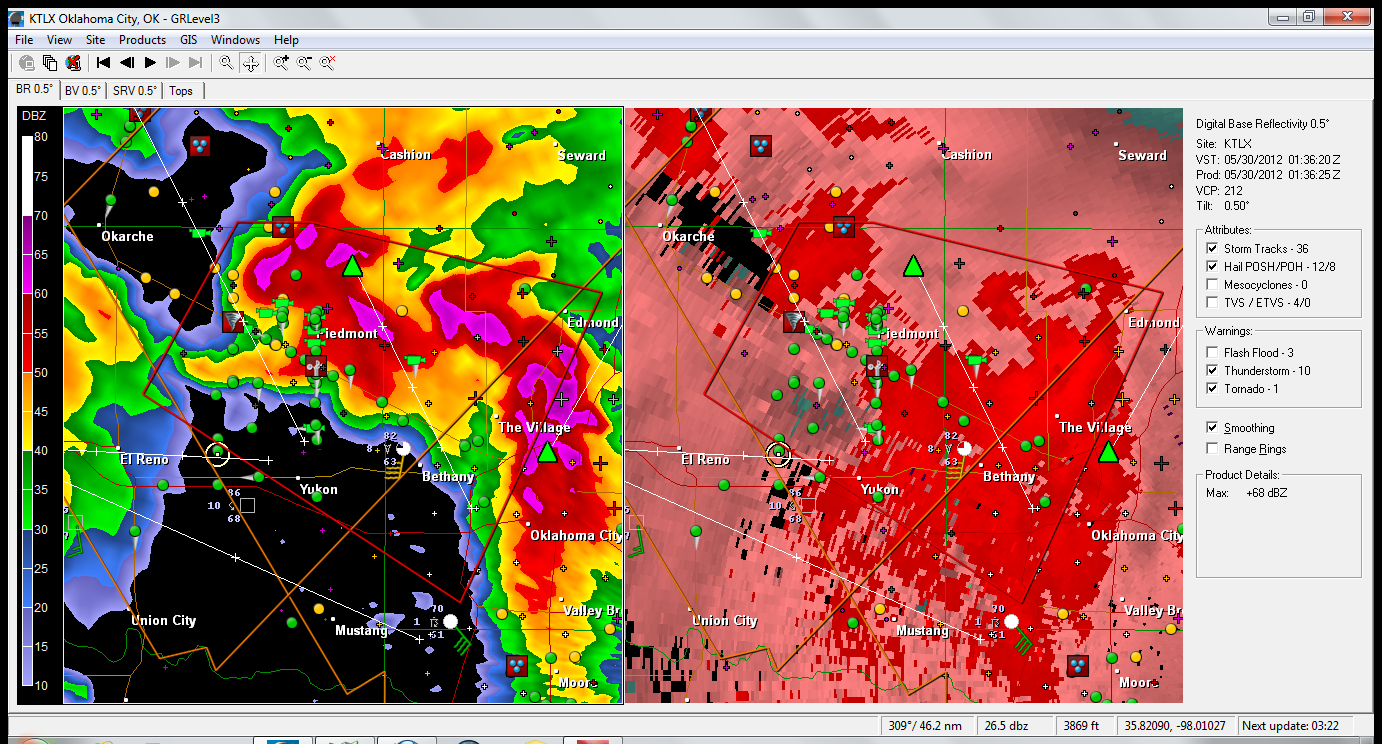 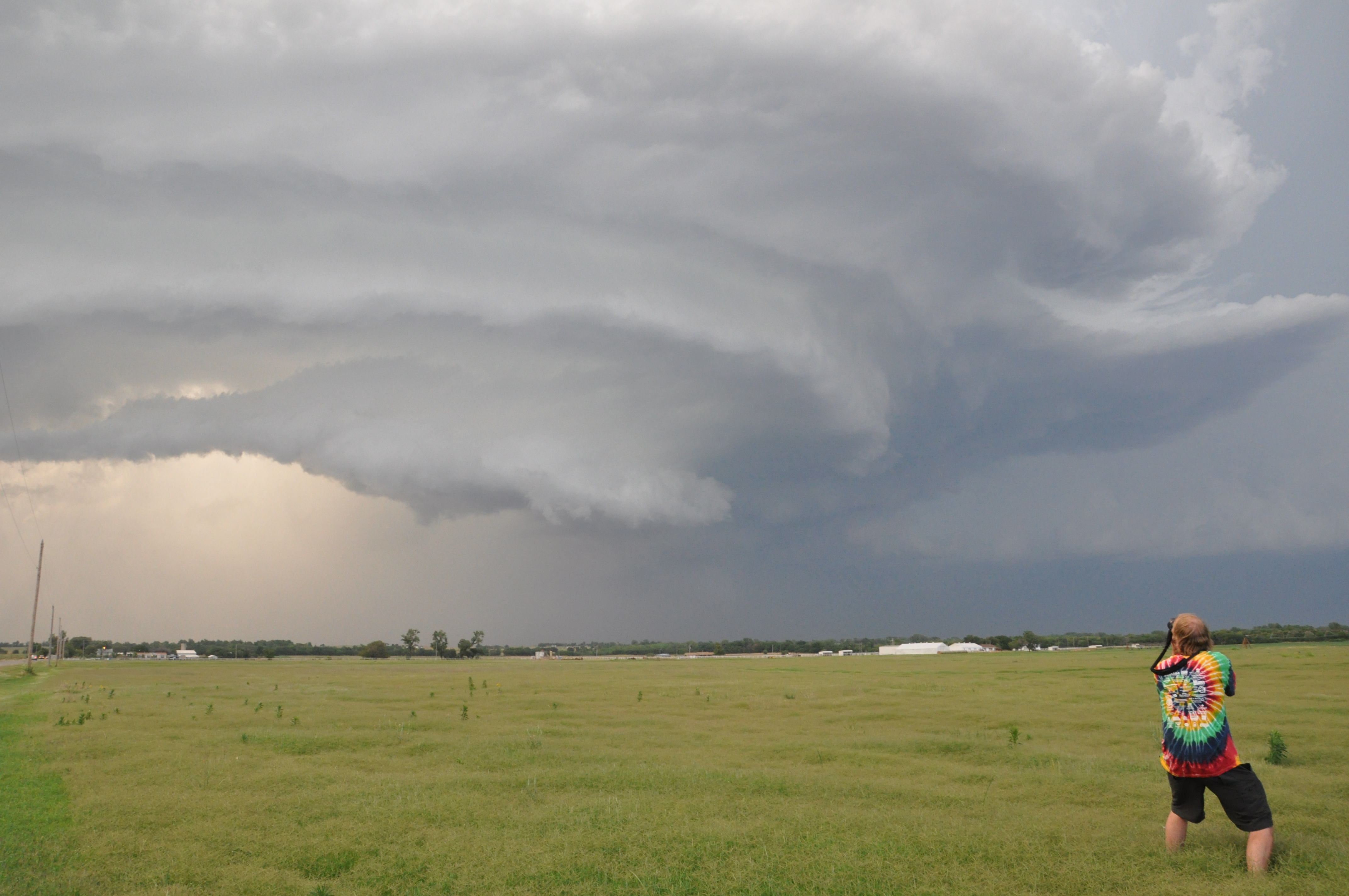 What was visible from our safer location, was truly the most remarkable structure in a thunderstorm that I have yet to see. It by far exceeded the ‘idealized’ storm that is often noted in textbooks, and the students got to witness this first-hand in the Meteorology laboratory that is the American Great Plains. It truly is an awesome sight that a picture can do no justice in describing.

Despite narrowly ‘missing’ a tornado, the forecasted main risk for the day was high winds and large hail which all occurred. We were able to witness the high wind after dark (no pictures) as a 71 mph wind gust was recorded at a Oklahoma mesonet station near our location near Minton, OK. The high winds presumably knocked down power lines and we observed many large ‘power flashes’ as transformers blew and knocked out power to the nearby town. Also many reports of hail the size of 5″ were collected from this massive storm. 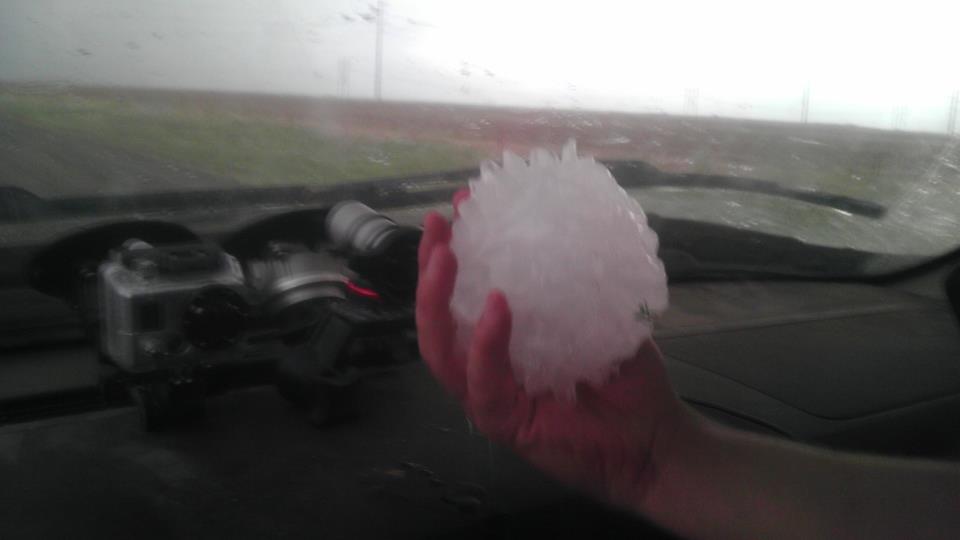 Another special treat was we happened to see Mike Bettes and the Weather Channel’s crew do a live broadcast on the side of the road as we all watched a nice storm west of (and out of) Oklahoma City, just after dark.

After a long and successful day, we have finally settled down in Stillwater, OK with eyes on another great chase day tomorrow, which looks to be as good, if not better, than today.