Day 12 started off with a forecast discussion in Weatherford, OK. There was a moderate risk issued for parts of south central Oklahoma into central Kansas. The original target was for Stillwater, OK. All of the needed ingredients stacked up over that area. We had plenty of synoptic scale lifting from the upper level winds. There was a sufficient moisture axis with dewpoints in the upper 60s. CAPE values for the area were in the range of 2500-3000. Along with that, there was relatively no cap. The environment was great for storms. However, as we were leaving the hotel, we noticed storms firing up just to our southwest. We made the decision to go and at least check those storms out. The supercell we stayed with did not produce a tornado, but it did provide some beautiful structure as it was a low precipitation supercell. 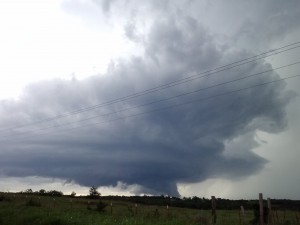 This is what we saw for the majority of the day. We stayed with the southern supercells and ended the day watching a lightning show as the storms dissipated. 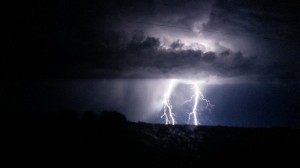