After waking up yesterday morning in Cheyenne, Wyoming we decided to chose our target of Denver, CO. Conditions looked substantially better than the previous chase day. Instability values were higher, and our LCL’s were lower making for a better probability of supercell development. Theta-E values were nosing into the general northeastern Colorado area providing the atmosphere with more moisture to work with.

Before heading to our target area, we made a pit stop at the University of Colorado. After driving around the campus, and looking at the nearby buildings, we went to the off campus atmospheric science facility. From there, our next stop was Denver.

We decided to wait just outside the city to catch our storm, and follow it as it traveled east. We made it to an open area where we could see the enhancement of the supercell, and the rotation of the over all storm.

Standing just northeast of the storm watching it traverse eastward.

We followed the supercell for a few more miles, and moved away from the hail core which was producing 3.5 inch in diameter hail at the time.

Second vantage point of the supercell near the Denver airport.

We encountered many other storm chasers during this storm which made traveling around a little more difficult and dangerous. We ended our day by eating at a little Mexican restaurant in Aurora, CO.

A few more pictures taken during the Denver supercell: 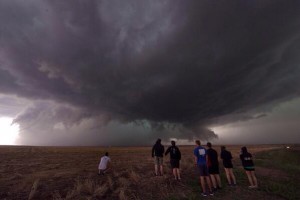 Another look at the Denver supercell. 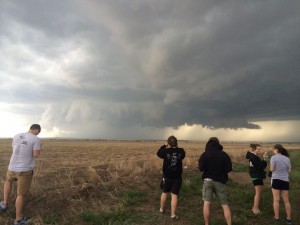