We started our day in Mile City, Montana and after our morning forecast discussion, our target area of southwest North Dakota was chosen. This area was chosen based on the forcing from the cold front, upper level support, and CAPE. The ingredients were not impressive for severe weather; however a small window of opportunity existed. We headed to Bowman, North Dakota for lunch and ate at a local diner called Eat’s and Treats which was delicious!

We decided to head to a local park to wait for storms to initiate, but when we headed outside, cumulus clouds had begun to form along the cold front. Due to this, we decided to head east of the developing storms and let them come to us. When we got east of the storms, a few had become severe thunderstorm warned. 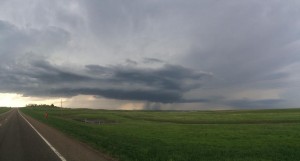 We chased a cell just to our north which showed slight rotation. The storm dissipated. We then chased a second cell, which eventually lost its warning. After the chasing the second storm, we decided to head back to our hotel which was in Spearfish, South Dakota. If any storms looked impressive along the way we would chase. We stopped about 70 miles from Spearfish and observed some impressive lightning off in the distance. 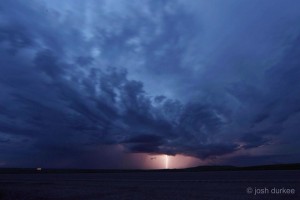 Lightning from a storm about 70 miles from Spearfish, South Dakota.

After we observed the lightning, we headed to our hotel in Spearfish.