We arose bright and early today in Spearfish, SD and took off southwest.  Looking over the models while chowing down on some delicious breakfast, we determined the primary mission today was a “travel day” to Ogallala, NE in order to get in a good position for tomorrow’s promising weather.  Nonetheless, our target area entailing the boundary of Wyoming/Nebraska just so happened to be along the way giving us something to look forward to.

The weather set-up for today was pretty far from ideal though.  Adequate dewpoints with a shortwave trough positioned over the region meant storms had the fuel and the lifting mechanism to fire up.  Unfortunately, upper level support (i.e. speed, shear, helicity) was lacking.  Because of this, storms were rather weak and the structure was clustered instead of solo supercells. 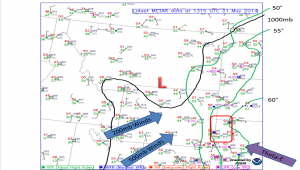 After reaching our target area we set up base camp in Lusk, Wyoming.  We ate lunch at the Outpost Café (I give it a 4/5 rating, if you are ever in the area looking for some good grub) and played some football at the local park.  Chase teams from Rutgers University and the College of DuPage were also at the park playing the waiting game.  Around 4pm MDT moderately impressive storms fired up around the region.  We viewed one storm from Lusk and then chased another around the town of Torrington, Nebraska.

Storm as viewed from Lusk, WY 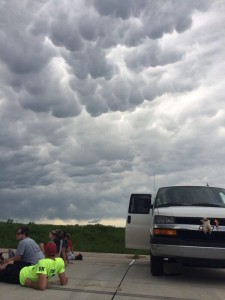 The chasing soon ended as the storms weakened and clustered together soon after 6pm.  We finished the drive to Ogallala, NE where we are currently catching some ZZZ’s.