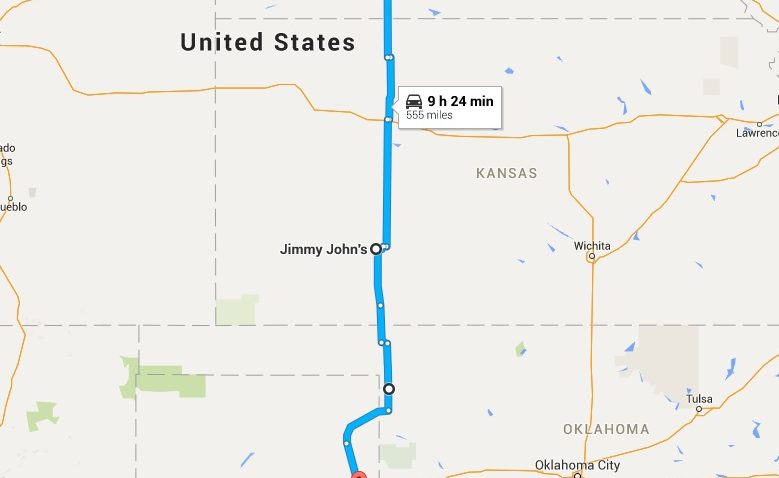 Morning observations identified a weak surface low over the extreme western Oklahoma Panhandle as a result of a shortwave trough rotating through the region that would provide some convergence and an anchor for the dryline draped in a southwest-northeast fashion across the Panhandle region. Model data indicated that CAPE values would reach the 4-5000 J/kg range by mid-afternoon, and steep low-level lapse rates would advect into the area as well. Ample moisture and weak capping in this environment indicated strong updrafts would be possible capable of producing severe hail. Bulk shear values between 35 and 45 knots that would increase throughout the day pointed to the likelihood of supercells capable of producing tornadoes. A convective outflow boundary from an MCS (mesoscale convective system) moving out of central Oklahoma would cross into Texas by early afternoon, and would provide an area of enhanced shear due to the forced backing of the low-level wind profile along this boundary. We decided to target the southeast Texas Panhandle for initiation; specifically Clarendon, TX. Due to the distance of the target from our Nebraska hotel, an early start  of 8:30 AM CST was required, and it was uncertain if we would even make it to Clarendon by initiation hour.

10 AM CST SPC Mesoanalysis indicated decent low-level shear and Effective SRH (storm relative helicity) maximums in the 400’s already in place over the target region. This caused STP’s (significant tornado parameter) to rise above 2 over the target area before daytime heating even occurred, which was very impressive. By 2:30 PM CST, model guidance and mesoanalyses began aligning and agreeing on the southeast Texas Panhandle for the best chance of tornadic supercells. Inititation took place around 3:40 PM CST less than 5 miles east of Clarendon, TX, a bullseye hit on our target selection. We were still about 40 miles away, so we changed route to intercept the storm south of Shamrock, TX.

We intercepted the LP (low precipitation) supercell east of Clarendon, which began entering a mildly capped environment shortly after we arrived (Figure 1). Although the structure was impressive, it was very similar to storms we chased yesterday in Nebraska, so we opted to move to better looking storms to the southwest. As we made our way there, all other initiated cells seemed to once again struggle when moving east away from the dryline. The SPC offered the possible explanation of a lack of low-level convergence in this area, but with storms already initiated, it seemed that they should be able to support themselves in such a rich environment. We began scratching our heads once again in Memphis, TX as we waited for a better cell to organize. 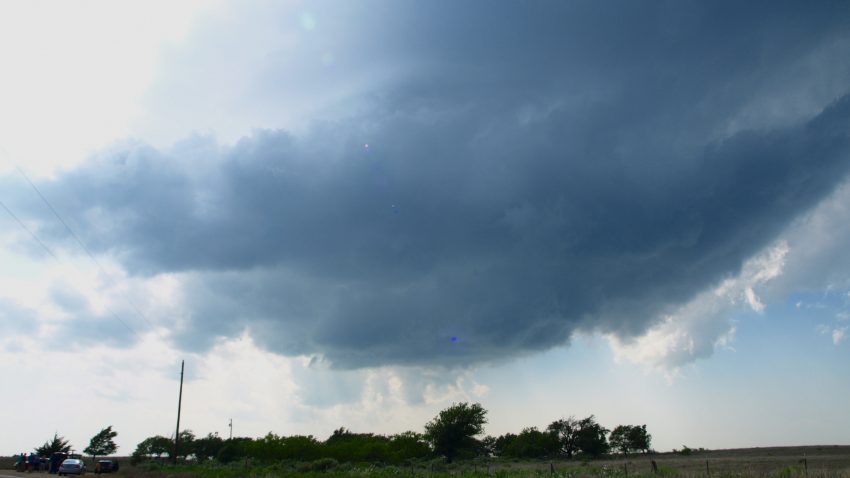 With daylight fading, we began a last ditch effort to chase a cluster of storms developing west of Memphis. As we chased, the cell south of Alanreed, TX began to show signs of rotation and a hook echo. We changed our route to intercept the storm since it was the best looking in the cluster. On our way there, we decided to take a questionable road (County Road E on the map) to get a better look at the storm. We had to turn around when it got too muddy, and as we tried successfully to 100-point-turn our way out, a TVS appeared on radar, and reports of a brief weak tornado over nearby I-40 also appeared. We returned to a higher quality road and viewed the nearly stationary storm from an excellent vantage point, but never viewed another funnel from the storm (Figure 2). 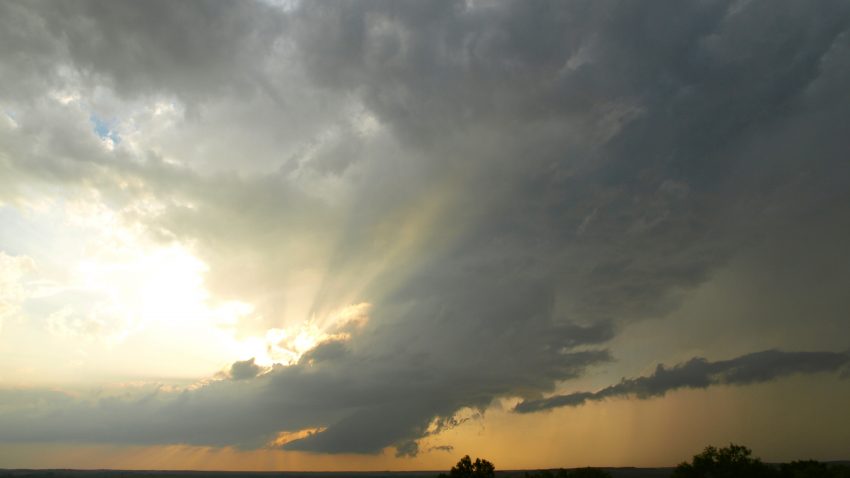 Figure 2: Post-tornadic cell beginning to shear its own updraft off

The storm eventually twisted its own updraft off in a similar fashion to yesterday’s storms as it entered a more stable environment to the west, but it looked remarkably unusual. The updraft seemed to feed a much larger area of downwind precipitation than it could support for its size, and it appeared to twist and rope away from a far-away and miniscule inflow base (Figures 3 and 4). It was a structure I’ll never forget. 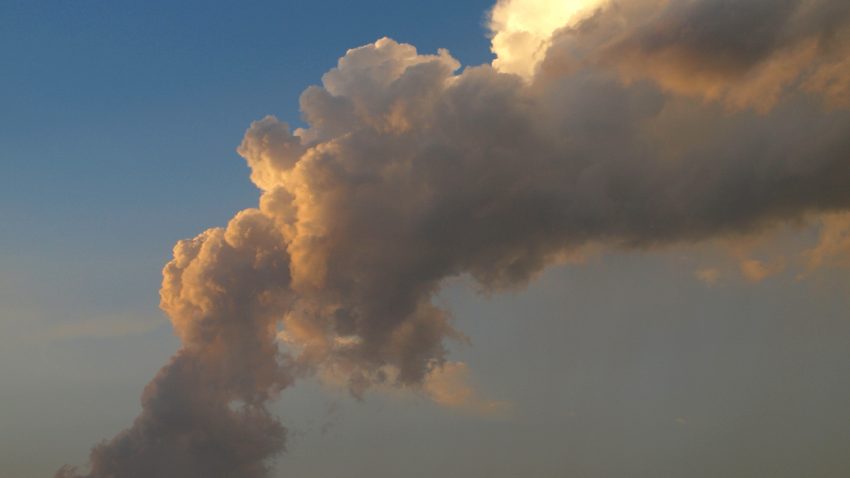 Figure 3: The updraft begins twisting itself off. The rotation is clearly visible. 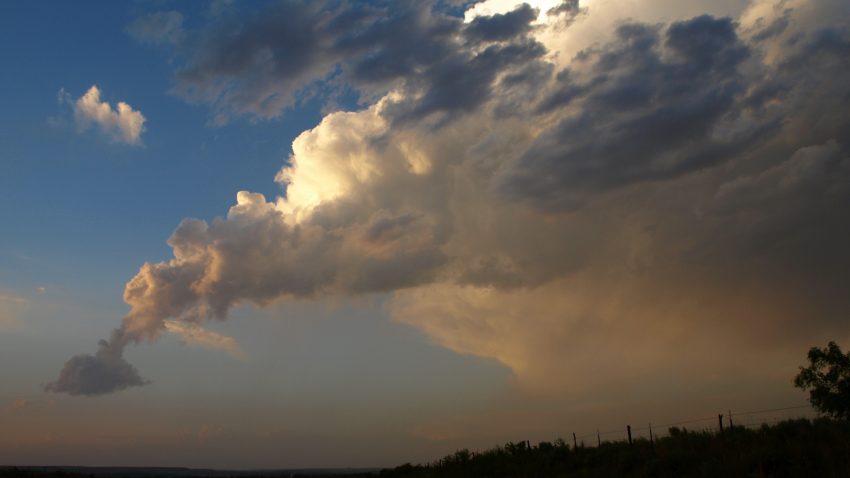 Figure 4: The updraft completely separates from its cloud base.

The sun set shortly after the tornadic storm dissipated, and we were able to take some excellent photographs of a supercell to our south whose colors were so vivid they barely needed to be edited (Figures 5 and 6). We proceeded to our hotel in Shamrock, TX for the night. 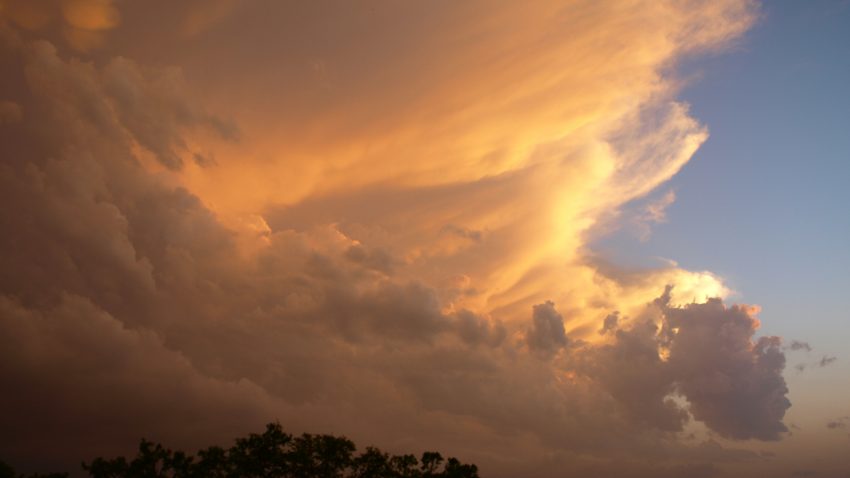 Figure 5: A vivid sunset lights up a southern supercell 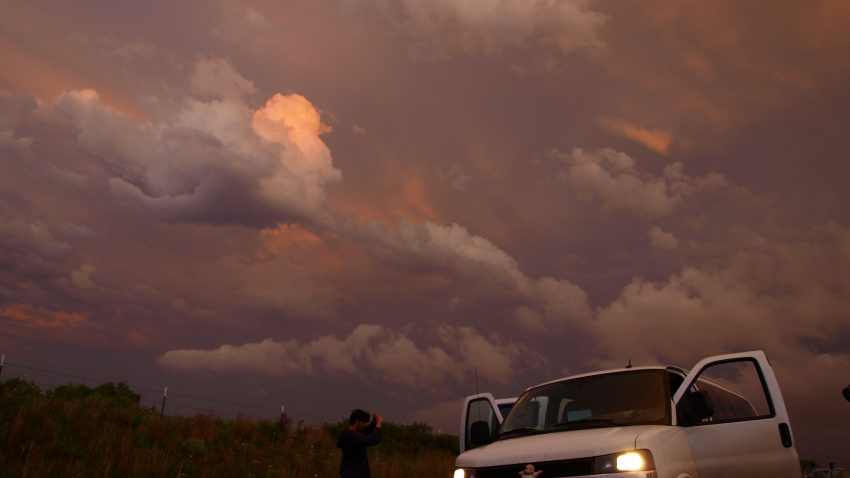 Figure 6: Sunset on the van

Hopefully Shamrock can provide us with some luck as we proceed north and east to chase tomorrow!

In addition, one of our students, Lucas Cantos, took several time-lapse videos of our amazing structure day in Leoti, KS on Saturday. They are some epic glimpses at the storm’s motion, so follow this link to have a look.