Severe weather during the Fall in Kentucky

Now that we’re in the month of October, everyone has begun to relax, enjoy football season and get ready for the changing seasons.  It is important to remember, however, that a “second severe weather season” begins for much of the south around this time of the year.  The fall “season”, though not typically producing the prolific outbreaks that we’d witness during the spring time, can still cause a lot of devastation.  It is important to be aware of the weather during this time of the year; with decreasing daylight, there is a greater chance of a nighttime tornado.

Below is a map showing just how affected our area can be. 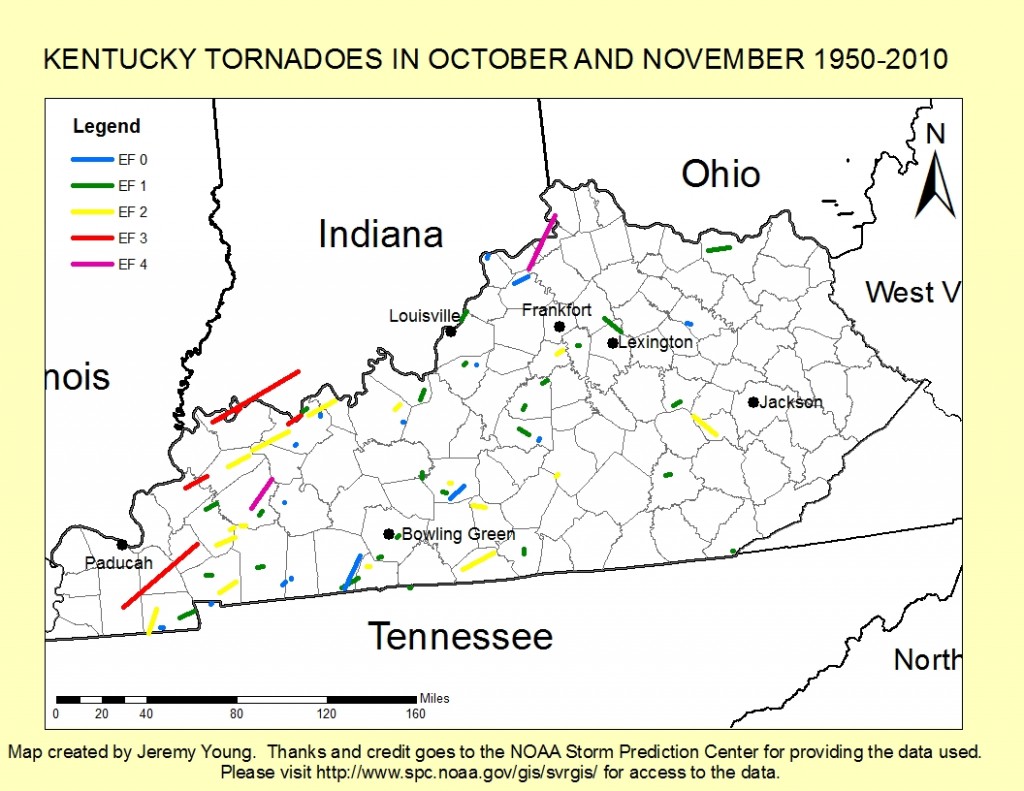 Many thanks also goes to the WKU Department of Geography and Geology for providing the GIS software used to create this graphic.

As you can see, many strong and long-lived tornadoes have hit the Bluegrass State over the last half-century.  South-central and western Kentucky have been much more active in regards to tornadoes during this time.  As recently as last year, Warren County witnessed an EF1 tornado touch down.  Moreover, several EF3 and one EF4 tornadoes have touched down in western Kentucky, ranging in location from south of Paducah toward Hopkinsville and northward toward Owensboro.

So the logical question would then be, why severe weather this late in the year?  We’re all aware that with the changing seasons, solar input decreases with the decreasing duration of daylight.  But, what does that have to do with anything?  This magnifies an increasing temperature gradient across much of the United States, allowing for upper-level winds (most importantly the jet stream winds) to increase in speed.  The increase in the upper-level winds helps to create stronger frontal systems to impact the country.  During this transitional season, the last bit of summer hangs on long enough to interact with one of these frontal systems, allowing for a warm and moist air mass to be in place just in time for the arrival of one of these frontal systems.  Ultimately, all of the ingredients can be in place for strong to severe storms.

Another reason to pay attention to the weather here during the “second severe weather season” is the forecasted return of La Niña.  During La Niña conditions, more significant outbreaks are seen, longer track tornadoes are seen, and more violent tornadoes are seen (Knowles and Pielke, 2005).  The La Niña influence on the positioning of the jet stream places the Ohio Valley, and certainly Kentucky, in an area of focus for fall tornadoes.