This morning we woke up in Junction City, Nebraska and headed north. Unlike the day before, there wasn’t really a focal point for the storms. Our target was northeastern Nebraska where the CAPE levels were forecast up in the 5000s, so instability was promising. A warm front was draped across this area as well and a moisture axis was punching up towards South Dakota. The shear wasn’t too bad either, though it could have been stronger. As the day progressed though, capping kept increasing. We ended up near Brunswick, NE waiting for the cap to bust. There was a little lift from a short wave, but the atmosphere was too capped off for the storm to develop any further. We enjoyed a beautiful sunset before we head back to Sioux City, Iowa. 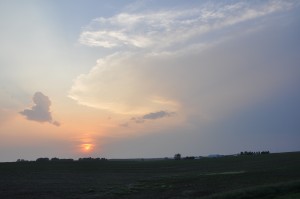 During our long drive towards our target we stopped at a local school and stretched our legs on the playground. The town of Brunswick held a few interesting features, such as a broken down hearse in front of an old home and a lot full of rusting automobiles. Our find of the day was a rundown shack in a field where we parked to watch the storm. Dr. Dixon was brave enough to look inside and found multiple animal pelts hanging from the ceiling. It was quite a shock! 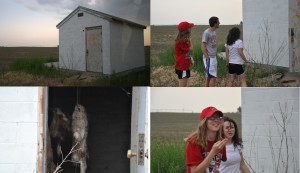 Though the day was uneventful weather-wise, we had a good time with lots of laughter. We ended our long day with a delicious dinner at Chili’s near our hotel before calling it a night. Tomorrow we’ll hopefully encounter a better setup for severe storms!