Today began in Sioux City, IA. We stopped to get gas and preform the necessary window cleaning and Rain-X applications. While at the gas station, we noticed that Reed Timmer, storm chaser with Tornado Videos. net, and his team were parked across the street. Becca Ollier and I walked over and got our picture with him. He was pleased to find out we were fellow chasers. 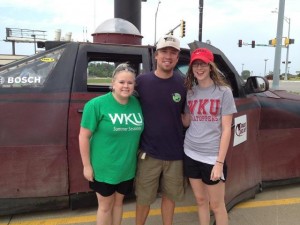 The discussion for the day was held in the van on the way to our target. Today was my day to give the forecast discussion. I began my discussion by naming my target to be Hays, KS. This target was generally agreed upon by the students as well as professors.

The set up for the day began at the 250 mb level with an upper level low situated over Idaho and Montana. A trough axis was situated just over the four corners region with a potent jet streak at it’s base with winds in the center reaching 100 kts. This jet streak was sustained into the 500 mb level with winds in the center around 70 kts. The surface theta-e analysis showed a moisture axis stretching from the gulf into Minnesota. The 850 mb mixing ratio analysis showed a moisture convergence boundary draped from Kansas into Nebraska. A weak circulation was beginning for the formation of a low in north east Kansas. A cold front was draped from Minnesota down through the Dakotas and to the east of Kansas and Nebraska. As the weak development of the low progressed in eastern Kansas, a warm frontal boundary also evolved. The dry line was located just to the east of Kansas and Nebraska and was forecast to move into the states as the day progressed.

The general discussion was that the dry line was the best target for the initiation of storms. Dew points were forecast to be in the mid-50’s to 60’s over the area. CAPE (convective available potential energy) was forecast to be 1000-1750 j/kg with only minor CIN (convective inhibition). Surface to 500 mb shear was forecast to be anywhere from 30-50 kts. The LCL levels were forecast to be high, leading us to decide that any storms that developed would have high bases and the tornado threat would be low. The thought was also that storms would be more linear in nature rather than individual cells. The hope was that the development of the low in eastern Kansas would help the winds begin to back.

The Storm Prediction Center had placed our target area in a moderate risk for today. This was based upon the likelihood of widespread wind and hail events.

We got lunch at a Subway in York, Kansas. We then decided to drive into Smiths Center, KS and take a moment to relax and look further at developing data at Wagoner Park. By 4 pm, we had decided to move to Athol, KS as we watched storms develop to our north and south east. Storms continued to develop along the dry line throughout the day and we moved along it targeting storms we thought to be the most promising. We even ventured across the Nebraska border for a few cells.

Around 7 pm we were east of Gaylord, KS watching a storm to our west. We began to notice the cell to our south east beginning to move to be ingested by the storm we were on. We were hopeful that the interaction of these two storms would allow them to amplify and begin to organize some kind of circulation. The cells did merge and intensify initially. However, no substantial circulation evolved. 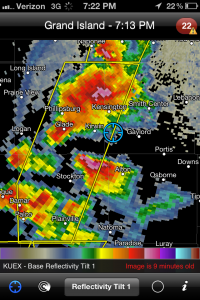 This photo of radar was taken around the time when the two cells to either side of the blue indicator (our location) were about to merge.

As we neared the end of the day, the storms had become more linear. We caught a view of a beautiful shelf cloud between Gaylord, Kansas and Smiths Center, Kansas. We also stayed around long enough to feel the winds of the associated gust front. We then began to travel east to catch another glimpse of it. 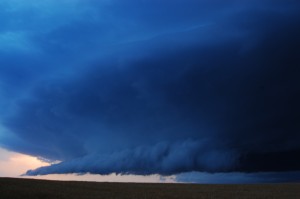 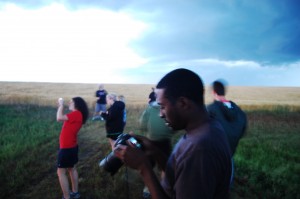 WKU Storm Chasers as the gust front moved through. Nathaniel Shearer adjusts his camera settings to better document the storm.

As we began to head back our hotel, we were able to see another beautiful lighting show. We stopped off in Cawker, KS to see the worlds largest ball of twine on the way back to our hotel. Weare staying in Salina, KS for the night