We started the day in Wichita, KS after a brief chase on our travel day. The SPC had already outlined the day with a “Moderate Risk” over north central Oklahoma into southeast Kansas, with one risk being tornadoes. The group gathered for our daily forecast discussion at 10 am and decided to initially target the Arkansas City, KS to Ponca City, OK area.

The morning (1425Z) surface analysis indicated a low pressure system on the OK/TX border with a dryline bulge to the south. Meanwhile moisture was being advected north into north central OK and south central KS.

This was an area beneath a jet streak at 500 mb and also a strong 850 mb low-level jet which was expected in increase into the evening hours. Instability was more than sufficient with values over 3000 j/kg and bulk shear were also sufficient over the entire region. Furthermore there was a dryline bulge forecast to move in very close to the OK/KS border just south of Wichita. There were a couple of issues for the day, one being that the cap was nearly non-present by early afternoon which allowed convection to initiate early and possibly become clustered by the late afternoon hours when the atmosphere was a little more favorable for tornado development. Also storm motions were much faster than our previous day in the realm of 20 to 30 knots; that however is still very workable.

We left Wichita and moved east and south and ate lunch in Winfield, KS. We then drifted south to Arkansas City and around 2:30 storms began to fire along a boundary just west west of I-35 and southwest of Wichita, so we moved west toward the storms particularly one just southwest of Wichita. As we approached the storm from the southeast the rotation was strengthening  and a tornado warning was issued for the storm. Then around 3:20 (now moving east down a dirt road) we spotted a funnel cloud just to our north which briefly extended a condensation funnel to the ground and thus became our first tornado of the trip. The tornado only touched down for a matter of seconds before lifting. 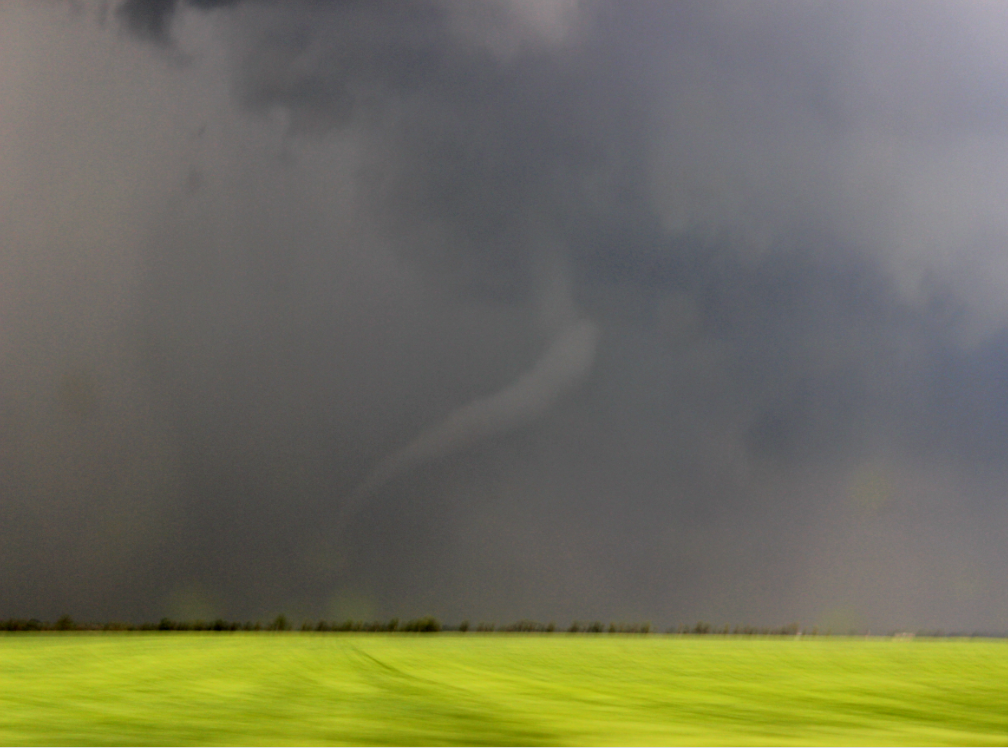 We continued to travel northeast with the storm to Wichita. We never saw another tornado from our vantage point southeast of the storm but a radar imagery denoted that the tornado was likely blocked by rain. Indeed other 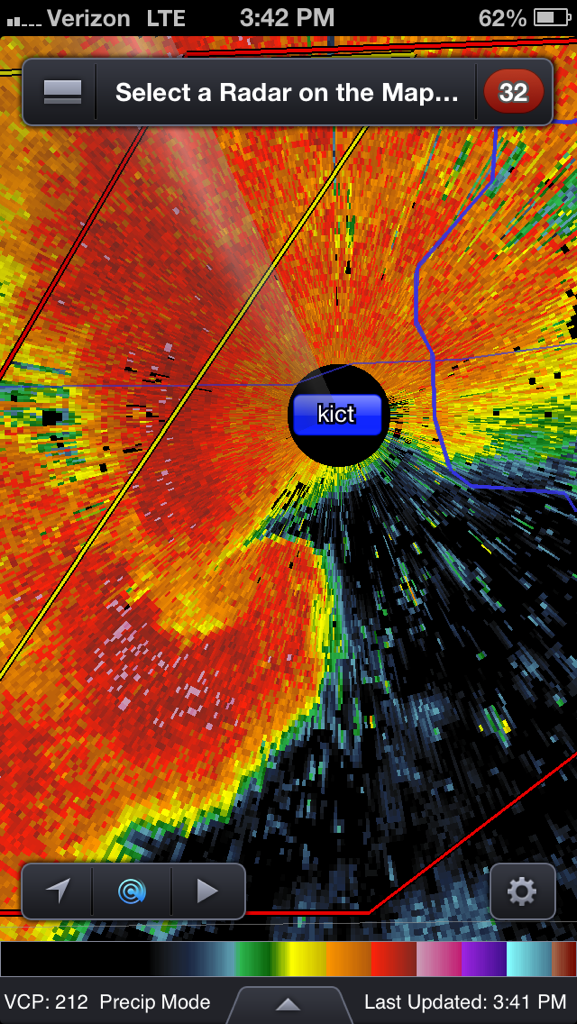 Base radar reflectivity just southwest of Wichita, KS. Our location was to the south and east of the storm and thus a tornado was blocked by rain from our vantage point.

chasers reported another tornado around this time. As the storm moved into the populated areas of Wichita, we moved south to developing supercells on the southern end of the line. We continued stair-stepping down to the southern supercell along the line for much of the rest of the day and while rotation was present and lowerings in the clouds noted near the updrafts, nothing appeared to be close to producing a tornado. We ended the chase just east of Ponca City and moved southeast to Tulsa to spend the night.