We kicked the day off in Spearfish, South Dakota and headed southeast toward the Badlands for a little sight seeing on our way to our target location. 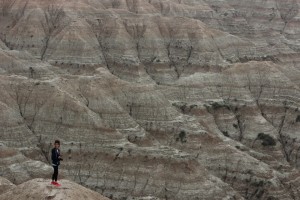 We initially planned to head to extreme southwest South Dakota, but as the day progressed and new data came in, we decided to head more toward northwest/ north-central Nebraska.

The main severe weather threat being large hail, damaging winds, and an isolated tornado. We arrived in Thedford, Nebraska around 5pm and began waiting for storm initiation. A cell fired up just to the east of us around 6pm. The storm intensified rapidly but remained relatively stationary. Incredibly strong inflow continued to enhance the storm by pulling in warm, moist air. 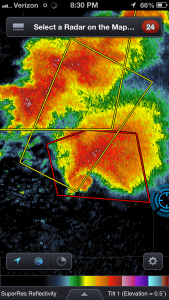 We found a good viewing location for the storm, but were forced to head south once we began being pelted by hail. Internet access and cell phone service was nearly absent throughout much of the chase, forcing us to blindly navigate away from the hail core and southwest corner of the supercell where the radar indicated a possible tornado. We found ourselves trying to maneuver deep sand back roads and encountered several dead ends. Finally we made it back to a paved road and were able to gain a signal for the radar. The supercell had been downgraded to a severe warned storm, so we headed about 20 mile south to another storm with better rotation. By then it was already dark and the storm didn’t look overly impressive, so we pulled off the road and enjoyed the amazing lightning show. 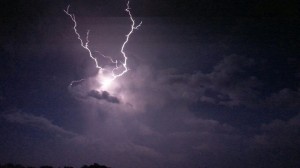 After the lightning drifted too far for viewing, we headed back to our northwest toward the previous storm that was still cranking out quite a lightning show. We ended up off the main road in a windmill farm watching the beautiful flashes of lightning illuminate the mammatus clouds. 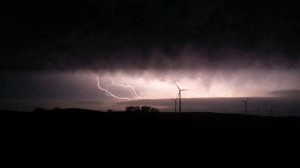 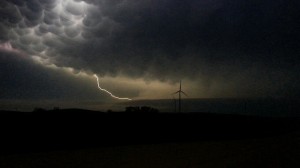 After about 45 minutes we headed toward North Platte, Nebraska to our hotel. We arrived around 12:30am and within minutes everyone was snoozing.