We conducted our forecast discussion in the morning and left North Platte, Nebraska. Our target area was Smiths Center, Kansas which is extremely close to the geographic center of the conterminous United States! 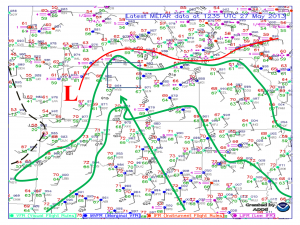 We stopped at a park or two to throw around a Frisbee and catch up on some sunshine. Initiation of storms began around 6pm and we chose a storm to the south versus one to the north due to chaser convergence. The northern storm had a tornado touch down, but was hardly visible due to rain obstruction. The southern storm was smaller, isolated, and relatively quite. We headed back to the hotel and chowed down on local specialty pizza in Salina, Kansas.