We started the day in Salina, KS after staying there overnight and catching much needed rest from the previous day’s chasing. As is usually the case we met at 9 am for a forecast discussion led by one of the students on the possible areas of severe weather. The Storm Prediction Center had outlined a very larger area under a “Slight Risk” of severe storms which extended from Texas to Wyoming and from Kansas to Michigan. When forecasting for a target area for our group to chase, the area can’t be half of the US and thus we must look more closely at the conditions needed for severe weather and narrow it down to choosing the best area. Morning surface analysis of current weather conditions offers a good deal of insight into where our target will be. 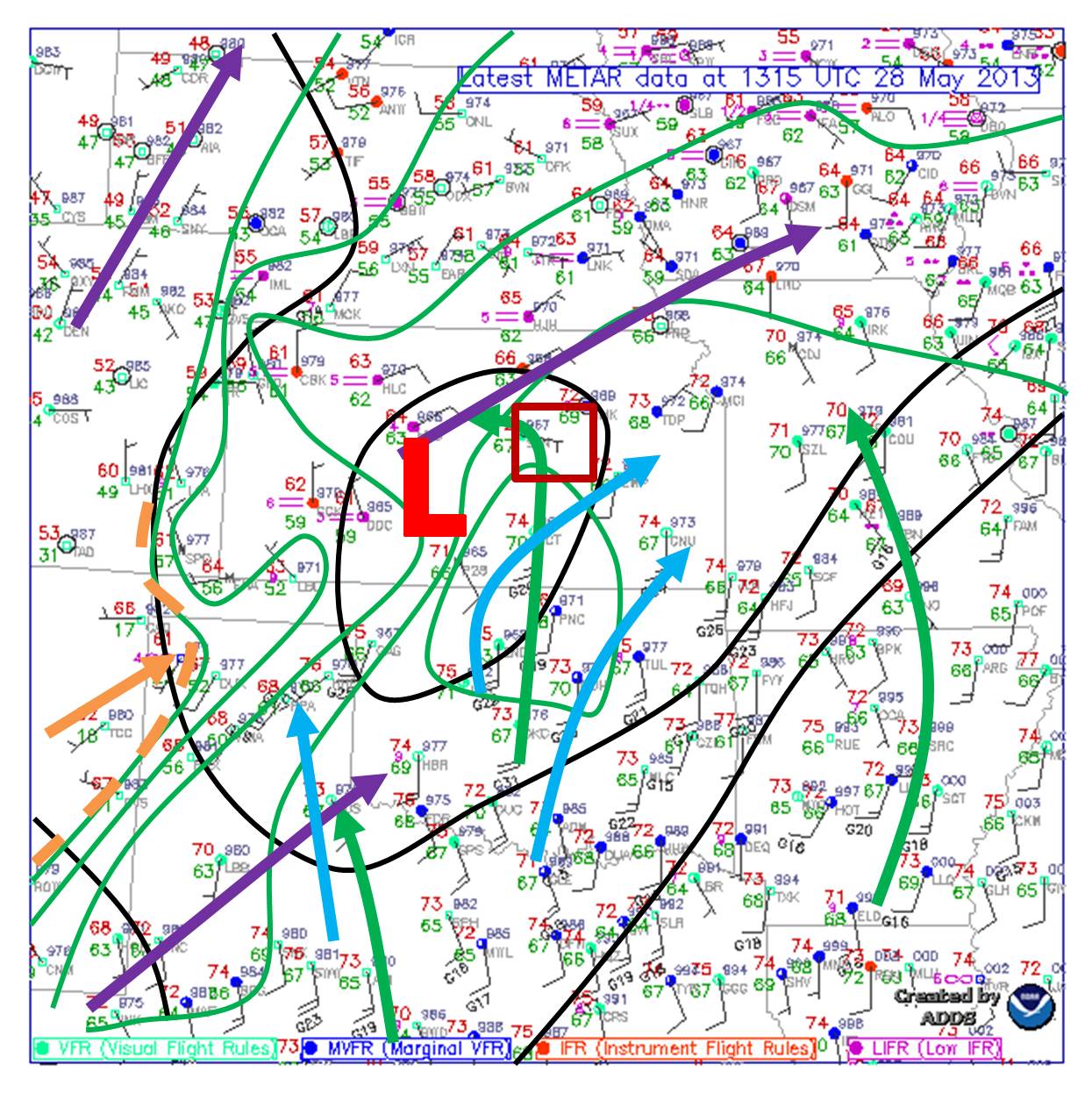 At around 8 am an a analysis of the surface revealed a low pressure system located in south-central Kansas just east of Dodge City with a dry nose of air pushing in toward the low from the southwest. This dry nose can often be the focal point for thunderstorm initiation however in this case the dry nose was well mixed until pushing all the way back to NE Texas where the dryline was located. A well-mixed dry nose is less likely to initiate thunderstorms. The analysis also indicated very warm moist air moving north (green arrows) from Oklahoma and Texas into central Kansas near the low pressure. The 500 mb (purple arrows) and 850 mb (light blue arrows) winds forecast by the computer models was overlaid on the surface analysis to better locate a target. Upper level support is essential for thunderstorm development and maintenance and especially for severe thunderstorms as the upper level winds will create wind shear. At 500 mb the strongest winds were located in NE Colorado/Panhandle of Nebraska which was closer to the main upper level trough. Then there was also a general 500 mb flow from west Texas across Kansas and into Iowa. At 850 mb  a low-level jet would be present into the panhandle of Texas and also flowing from central Texas into Oklahoma and turning east through southeast Kansas. When overlapping all of these features needed for severe storms and also forecast helicity (a measure of the ability to maintain a rotating updraft) a few targets we’re becoming apparent. One being in northeast Colorado another being in the panhandle of Texas and finally the one that appeared most promising to us (plus we we’re already there) was in the Salina, KS region. There was an upper-level disturbance (vorticity maximum) that was pushing through Kansas that was going to provide enhanced lift in this region as well which was clear on the morning visible satellite imagery.

With our target city being the city we stayed overnight in, there was no rush and the group actually took things easy at the hotel until noon. Then after eating lunch the group enjoyed some time outside at Kansas Wesleyan University while waiting for storms to fire. By 4 pm there was a rapidly developing thunderstorm off to our northeast that dropped a tornado by 4:30. This storm was out of our reach and in an area of trees and hills which we don’t desire to chase in. This storm was an indicator of the kind of environment we we’re near though which was obviously conducive to rotating supercells. Then by around 5 pm we we’re keeping a close eye on a developing storm that was poised to move right past us in Salina and once the storm appeared to be gaining strength we moved a few miles north to the town of Bennington. This rapidly developing thunderstorm developed a funnel cloud just west of Bennington by 5:30 pm. It was confirmed by other spotters that the funnel did touch down and thus was a tornado. 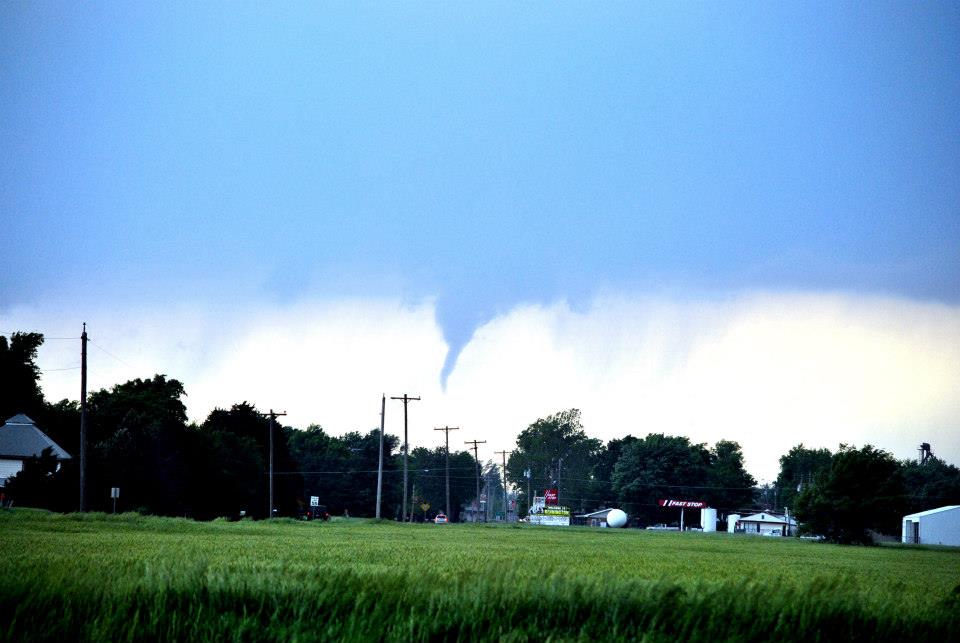 Funnel cloud which was a confirmed tornado (via other spotters) just to the west of Bennington, KS. Photo by Ilea Schneider.

We then re-positioned ourselves on a dirt road about a half mile east and slightly south of Bennington. By this time a rapidly rotating wall cloud was ongoing and tornado development appeared again likely. 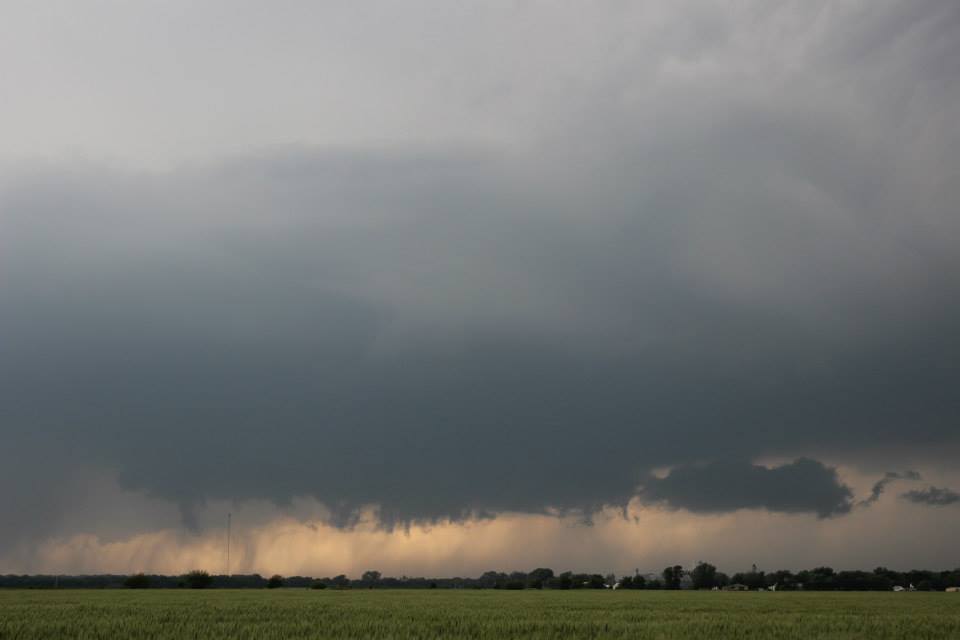 At around 5:46 pm the tornado touched down just west of Bennington and quickly grew to a large wedge tornado that was likely around a half mile wide at times. 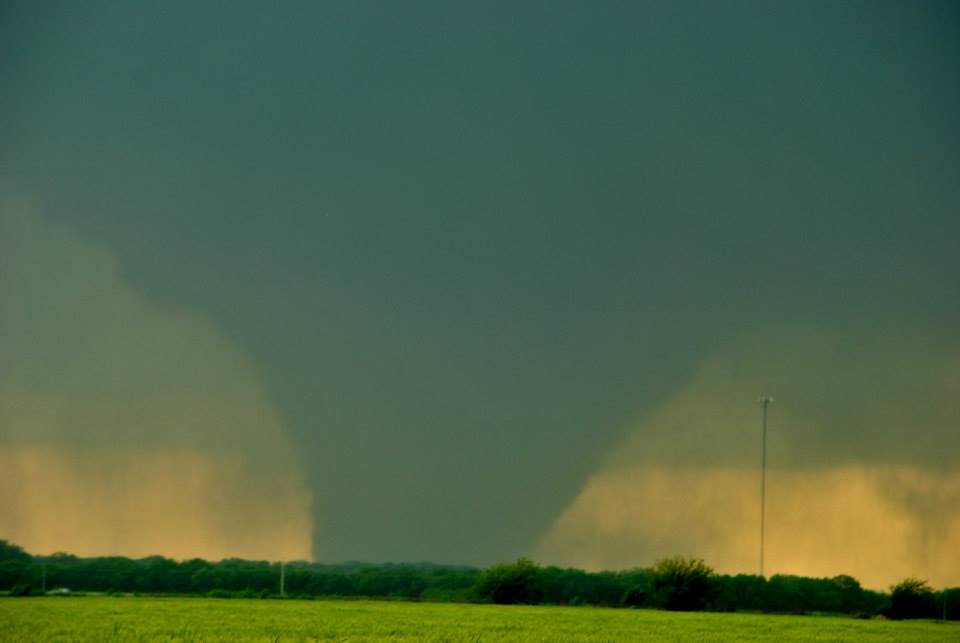 The wedge tornado that was just west of Bennington, KS. Photo by Ilea Schneider. 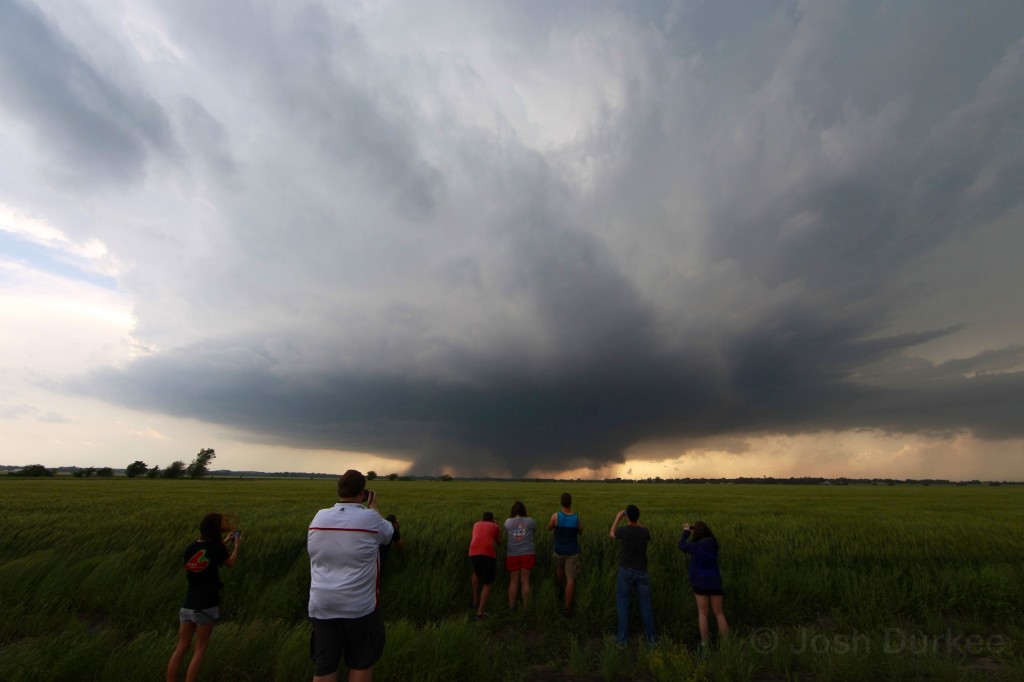 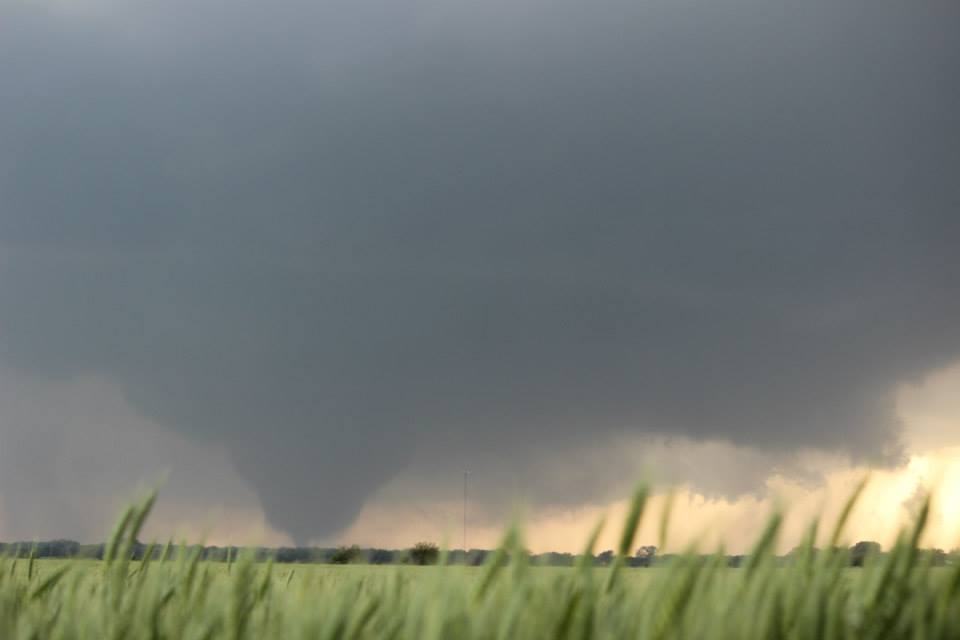 What was most interesting about this tornado is that it was nearly stationary and only slightly moved (less than a couple of miles) for it’s entire life cycle which lasted around ~35-45 minutes. The below radar loop from ~5:45 to ~6:15 of the supercell demonstrates this (click for image for loop). The left panel is storm relative velocity which gives an indication of the winds within the storm. The bright green and bright red colors side by side just west of Bennington are indicative of a strong circulation; this was indeed the tornado. The right panel is base reflectivity with the classic supercell with a hook which is also indicative of the circulation/tornado. Our location is indicated by the small white circle and dot. This loop was compiled by and courtesy of Dr. Grady Dixon from Mississippi State University.

The tornado often went in and out of the sight as rain sometimes obscured our view. We lost a visual of the tornado for the final time between 6:15 and 6:30 when the tornado became wrapped in rain and then we moved to make sure we would not be hit by any hail. 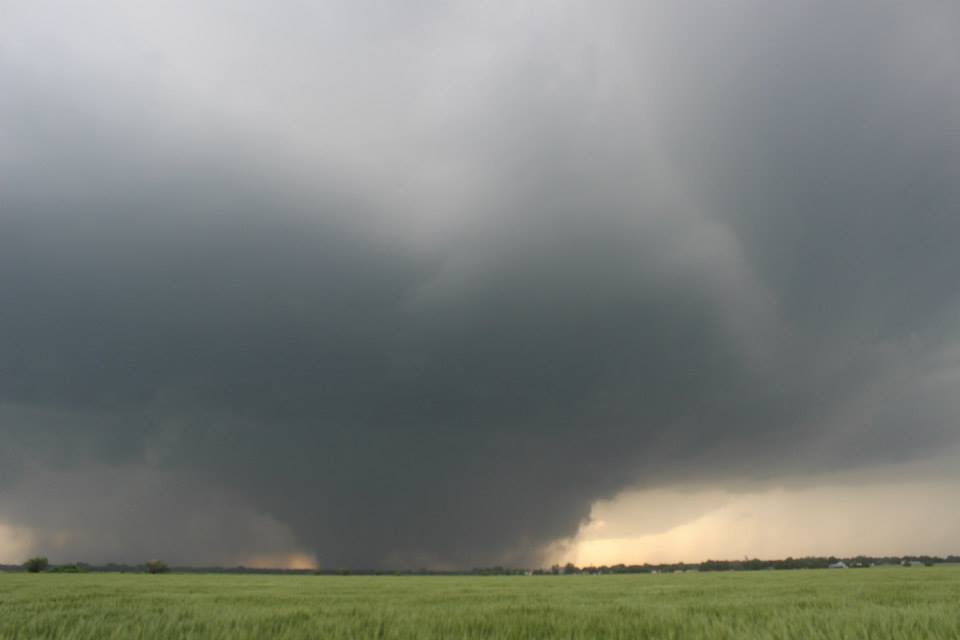 The partially rain obscured wedge tornado. In this photo the southern edge of the tornado can be clearly seen but the northern edge is difficult to differentiate from the rain. Photo by Andrew Shuler.

We pushed east, south and finally back west on I-70 to gain a better view of the storm. We moved north again to toward the base of the storm around 7:15 and some rotation was noted off to our northwest next to a colorful precipitation shaft. The rotation soon weakened and we decided to move south toward our hotel and possibly intercept another storm along the way. 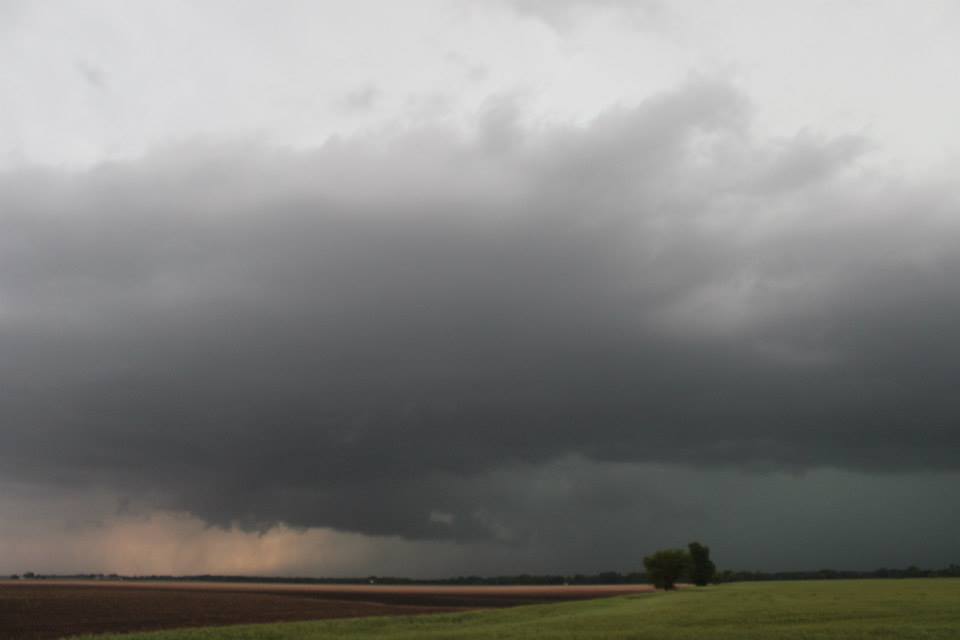 Rotation could be noted on the left side of this image while the precipitation shield displayed a blue/green color. Photo by Andrew Schuler.

The other storm remained weak and thus we continued to push south to our hotel in Andover, KS just outside Wichita. We of course hoped that no one was being affected by this tornado and we are happy to report that no deaths or injuries resulted from the tornado and that there were only few structures that were damaged.