The team started the sixth chase day in Odessa, Texas and headed toward our target city of Fort Stockton, Texas around 10:30 AM. Here is the surface map for Sunday morning: 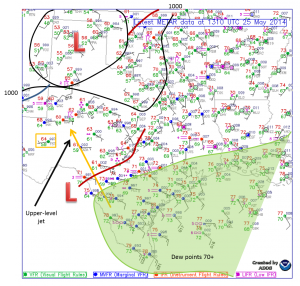 The set-up seemed very similar to the previous day, with upper-level support finally helping kick things up in our area, along with significant theta-e advection, wind shear, and CAPE for instability. Upper-level divergence was also present, producing lift around our area. Dew points remained unusually high in Texas, which would presumably help provide moisture to storms popping up along the dryline. Unfortunately, storms occurred the previous night and into the morning, diminishing available convection for the day. This was taken into account, however, as we decided to shift south and eastward for the target. Fort Stockton was chosen once again since it was to the south, but also because it would serve as a good pivot point depending on where cells decided to pop up.

We grabbed lunch at a Mexican restaurant called John Chihuahua’s in Fort Stockton, but had to head out quickly because a supercell had formed northeast of Marathon, Texas. Unfortunately on our trek southeastward to intercept this cell, we hit some hills and precipitation fog, which disabled us from seeing any structure whatsoever. This cell was tornado-warned, but continued to quickly diminish as we got closer to it. 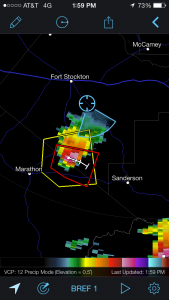 Since it was still fairly early in the day, we decided to hang out in Sanderson, Texas to wait for storms to erupt; at that time we were about 18 miles from Mexico. The SPC did issue a tornado watch until 10 PM, expecting, as we were, that storms would pop up later in the day.  The best storms appeared to be in Mexico, and did not cross over the border toward Del Rio until we had already started the trip back up to the north. 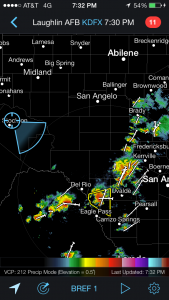 On the way back to Odessa, Texas for the night, we stopped in Fort Stockton for a much-needed Dairy Queen break before spending some time in a local park while the sun was still shining.

Storms that had been severe thunderstorm warned erupted in southeast New Mexico around 8 PM. We decided these were too far away to chase since it would be getting dark soon, but were still able to see some of the structure from where we were. 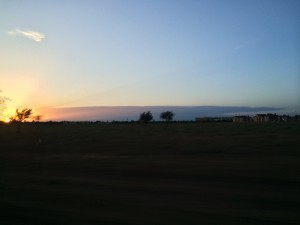 The team ended the night in Odessa with dinner at Chili’s and a weather briefing for the next day.

So while the day ended up being a bust, it was a good one nevertheless. The team was able to spend time together and a busted day really did make us appreciate the great days we had experienced previously this week. Another big forecast decision will be made today, as to whether or not we will stay in Texas for the day or start heading up north to our next target!