We woke up in Buffalo, Wyoming with a 7hr drive ahead of us. Our forecast discussion was held in the van, which led us to decide on Lewistown, Montana as our target location. Our discussion was centered on the fact that there was a lot of upper-level support throughout the northwest, including western and central Montana. In addition to good upper-level support, there was a prominent shortwave moving through the area, which was to serve as the lifting mechanism for the firing of the storms. There was also 40 knot bulk shear values throughout the region, which is what we had been lacking thus far on the trip.

We made our first stop for gas and food in Hardin, MT. While we were picking through the snacks at one of the local gas stations, we ran into our friend Kevin Deitsch from the NWS Louisville office. After looking over some data during our pit stop, we were faced with a tough decision. The models were consistently firing up storms at our target location, but as they tracked to the east there did not seem to be a good enough road network for us to safely follow them. Talking to a local trucker confirmed our doubts about the roadways, so after a little deliberation we made the choice to head east and let the storms come to us. We changed our target location to Glasgow, MT and set sail to Miles City where we grabbed some Subway. After a couple of hours and very bumpy ride on rough Montana roads we took a much-needed break outside of Fort Peck Lake, about a half hour from Glasgow.

We continued onward to Glasgow, where we found a nice park to throw some football at while we waited for storm initiation.

We then decided to head west to Malta, where some storms were beginning to form. We found a good spot outside of Malta and watched a supercell make its way to the northeast, into Canada. 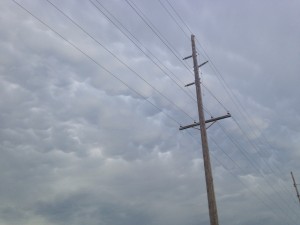 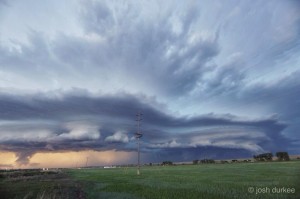 Storm cluster outside of Malta, Montana

Our time observing this storm was cut short by the fact that it got dark while we were watching it, as well as the fact that we could not travel very far to our north due to the Canadian border being nearby. At this point we were forced to throw the towel in for the day and enjoy a nice lightning show on our way back to Miles City, where our hotel was booked. The fun did not end here, however. While admiring the beautiful lightning to the north of us, we noticed what appeared to be a tornado–although this has yet to be confirmed. The possible tornado was nearly impossible to see, only showing glimpses of itself in front of the occasional perfectly-placed lightning strike. If this tornado is confirmed, it would be not only the first tornado witnessed on the trip, but also the first nocturnal tornado in the history of the WKU Storm chase Class. 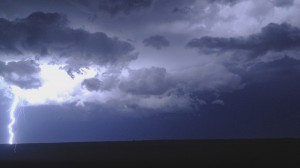