Today began bright and early in Gainesville, Texas. After a morning forecast discussion, we decided to head toward the town of Graham, TX. This would place us in a good area to await initiation of the storms that afternoon. For the first time in several days, the upper and lower atmosphere were beginning to show a more favorable environtment for severe weather. The 250mb winds (blue arrow) shifted from southerly to westerly as did the 500mb winds. The Low Level Jet (yellow arrow) also returned to played a helpful role today with 30 knot winds out of the southeast drawing moisture out of the gulf. This brought in greater than 60°F dewpoints (green line) over much of eastern Texas providing significant moisture for the region.  The greatest region of instability is highlighted in the orange half circle. This would eventually provide the necessary lift to produce the storms. The red box shows the target area of Graham, TX just to the east of Abilene. 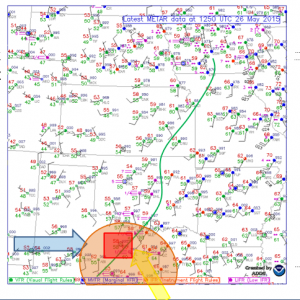 After roughly a two hour drive from Gainesville to just south of Graham, we stopped for lunch at Subway and headed to a local park to eat and watch the sky for storms beginning to pop up. It was not long before we headed back to the gas station to Rain-X the windows and get gas in preperation for the chase. Around 2:30 pm we began to notice one cell to the north around Breckenridge. 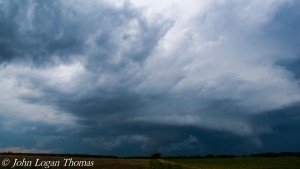 For the first time on the trip, we were able to watch the this storm develope while we sat in a hotel parking lot. We saw it initiate out the front window of the van and were able to keep an eye on it on the radar until the decision was made to follow this storm. Very quickly after the storm formed, a severe thuderstorm warning was placed on it, quickly followed by a tornado warning. We chased this cell from just north east of Breckenridge, all the way to Stephenville for the night. 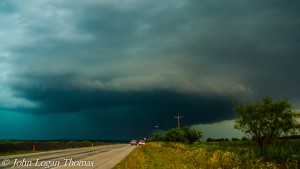 Due to the capping that did not erode until late in the afternoon, this cell was able to form and stay in a clean environment for longer before forming a line. Through much of the day, there was a lack of speed shear in the environment.  This caused the cell to be a high precipitation cell with a very closesly located updraft and downdraft. A tornado was confirmed by chaser, but we could not see it due to the curtains of rain surrounding the storm for most of the day.

When we arrived in Stephenville for the night, the storm had lost its severe and tornado warnings. We unloaded our things and allowed the much weakend storm to pass over us in the van. Due to the substantial energy in the storm, lightning was striking well into the night and could be seen even when the storm was long gone.