Today’s route map. An interactive map is available below

Marginal instability and low but sufficient moisture, as well as a moisture boundary moving into eastern Colorado led us to target Colorado Springs this morning. The lack of upper level divergence, lower level convergence, and frontal boundaries forced us to rely on the topography of the Rocky Mountains for lift. Low-level southerly flow would push moisture and instability north against the mountains, and an upper-level trough provided northerly flow, which would push any storms that formed southeastward along the moisture boundary. This led us to go ahead and book a hotel in Lamar, CO for the night.

We departed Raton, NM at 9:15 AM MT and arrived in Colorado Springs, CO for lunch at 12:15 PM MT. We enjoyed a quick Jimmy Johns and proceeded to the eastern suburbs of Colorado Springs to await initiation by 1:15 PM. Mesoscale analysis at 2:30 PM indicated an axis of instability stretching from Amarillo to Colorado Springs, and a moisture boundary approaching from the south was visible on radar, as well as to the naked eye. A cumulus field to the south demarcated that boundary. If a storm was going to occur, it would occur here.

By 3:45 PM, after waiting nearly two and a half hours for initiation, it became clear that initiation would likely not occur. Several updrafts attempted to rise (Figure 1), but instability was too low for updrafts to break the cap, even with topographic forcing and moisture present. We decided to proceed to our hotel for the evening. 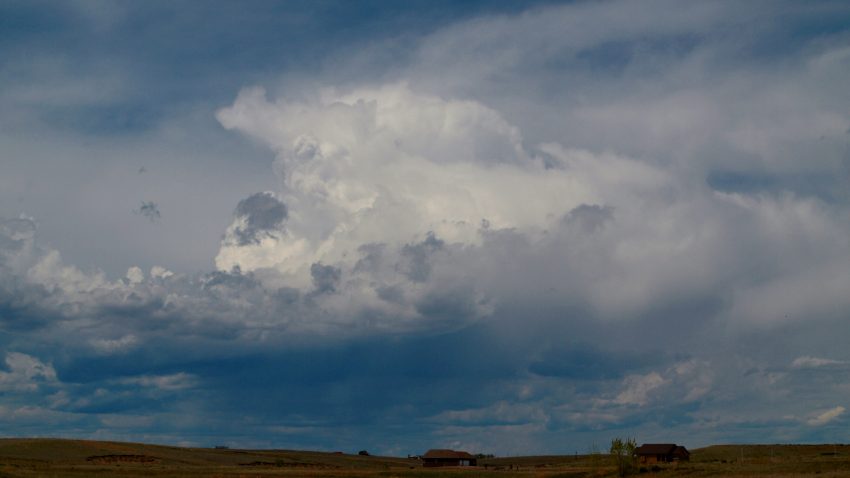 Tomorrow appears to be the beginning of a very active few days for us. An upper-level trough will begin to dig across the region, and the central Plains will see excellent moisture return over the next day or two. We will likely target the area of highest instability in southwest Kansas tomorrow afternoon. Stay tuned!

This entry was posted in U.S. Weather. Bookmark the permalink.