Our trip to the Great Plains began with a few road delays, but after 13 hours of persistent travelling we eventually reached our destination in Hays, KS. Nonetheless, our first objective of this trip was to pick up our friend and colleague Dr. Grady Dixon, who regularly accompanies Dr. Josh Durkee as an instructor for the class. 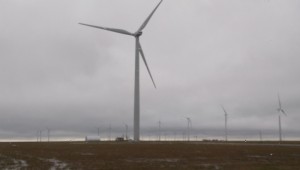 Miles and miles of wind mills throughout the Great Plains!

On the morning of May, 19th 2015, we departed Hays, KS and headed south. Model guidance and group forecast discussions led to general agreement to head towards the Texas panhandle where a target of Plainview, TX was established. A tricky forecast followed through as complicated mesoscale  variables, including positioning of surface boundaries and convective parameters that allowed little to no convective inhibition, led to storms forming to our east early on in our day. These storms tracked eastward into Oklahoma where the SPC had issued a tornado watch later on. 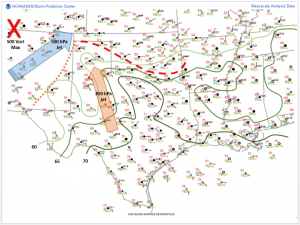 After departure, we passed through Dodge City, KS around 10 am, stopped for lunch at Subway, continued southward and were in the Oklahoma panhandle by noon. A quick 30 minutes later and we were in Texas and already having to make changes to our target destination. Storms and convection were ongoing throughout the morning and were very close to our track southward, this led to our decision to make a play farther east, attempting to get ahead of the storms moving into southwest Oklahoma.

After chasing these storms in the newly issued tornado watch area, we realized that the game of catch up would be much more effort for the reward and took a quick break in Childress, TX where we then waited for the dry line to initiate more storms to our west. You can see the dry line in surface analysis in the brown dashed line, this pushed eastward throughout the day and was the focus for storms throughout the evening.

Storms did eventually form south of Amarillo where we initially idealized early on in the day, so we headed back northwest to see whatever we could find, unfortunately complicated by persistent fog! 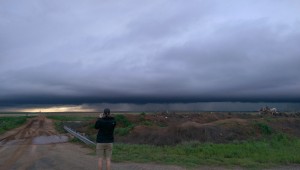 However, our efforts paid off as we were able to document some amazing storms throughout the evening as we traveled along to the southeast, back towards Childress, TX for the night. 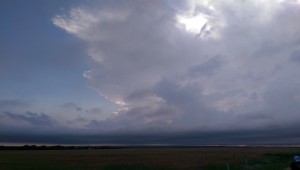 A nice sunset and view of thunderstorms as we ended our evening and headed into Childress, TX for the night.