After a successful first day of chasing, during which we analyzed and documented one of two supercells in the panhandle of Texas, we stayed the night in Childress, TX to analyze data for Wednesday. We woke up Wednesday morning and determined we needed to move further south where a cold front was moving south, intersecting a dryline in southwest Texas. Below is the composite map based on 12z observations. 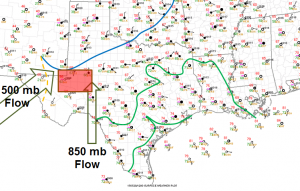 Flow aloft remained rather weak as mid level ridging was noted across the entire region. However, the cold front and dryline intersection was located in a moist and unstable atmosphere conducive for robust updrafts in thunderstorms. While the magnitude of the shear was not great, the directional wind shear in the low levels was conducive for multicell and supercell development. 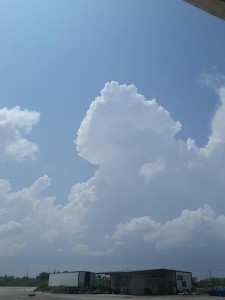 Click the image below to view a time lapse of cells trying to form around Fort Stockton, TX between 3:15 PM and 4:10 PM.

As we moved toward the region, cells began developing along the cold front, just as forecast. However, these cells quickly became elevated as the cold front cut underneath them. Thus, we headed further south toward Fort Stockton, TX to wait for initiation closer to the dryline and cold front intersection point. Shortly after 4 PM, we left Fort Stockton, TX in order to get a better view of a small, developing supercell. We got as close as 4 to 5 miles from the storm where the base and inflow were clearly visible. 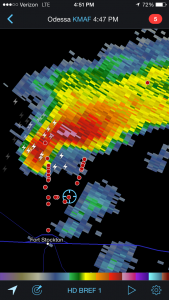 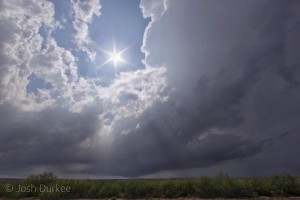 As this storm got closer to our location we moved to the east to get in better position. However, by this time the storm began to grow, as well as lose some structure. A hail core remained stationary over I-10, limiting our progress to the east. Around 6 PM, we decided to drive southeast as the storm began to make a right turn. At this time a wall cloud was reported on the storm, however we could not see it due to precipitation in between us and the storm. We called the chase off shortly after and have staged for Thursday in Alpine, TX, which is at an elevation of around 4,500 feet. 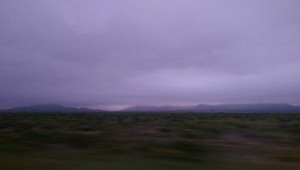