We began the day in Garden City, Kansas after chasing in southeastern Colorado. The surface analysis shows observations from the morning just before we left to chase and also model outputs for convection parameters. The 250mb jet(yellow arrow) is coming out of the south west, the 500mb jet(light green arrow) and 850mb jet(dark green) are primarily out of the south. The analysis also shows the local vorticity max(red circle) over south central Oklahoma/northern Texas. This overlapped with the local helicity max(light green circle) which, with a little help from the dry line(light orange dashed line) could potentially cause enough lift to produce storms over the target area(red box). Dew points started off in the mid to upper 50s and lower 60s across the area of interest. With the upper level winds lacking the essential profile needed for good sheering, the dry line was our key factor for the target. 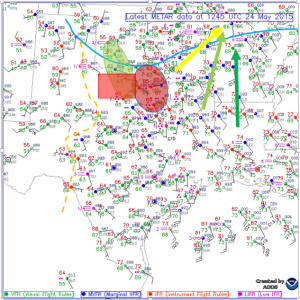 We departed Garden City, KS a little before 10am and were heading south towards Canadian, TX. We stopped in Hooker, OK where the group grabbed a bite to eat at the local Subway and gassed up. After heading more south towards the target we decided to stop and admire a wind farm outside of Borger, TX.

After about 20mins of observing them, we took off and continued to our target. Continuing the drive, we past a local landmark known as Palo Duro Canyon. We stopped in Silverton, TX to wait for the storms to initiate along the dry line. After tossing the football around for a bit and noticing nothing was really initiating we drifted more south to Turkey, TX. Here we sat for primarily the rest of the day waiting on initiation but due to lack of lift from the dry line, nothing was firing up. Blue skies dominated the area we were in other than a few passing clouds. Around 7pm, we made the decision that due to the lack of  lift we were going to head to our hotel located in Altus, OK, 110 miles away. We arrived at the hotel at 8:30pm.